Most readers know Ostendo Technologies as the company that developed LED-based light field displays with significant support from the Air Force Research Labs (AFRL). That effort has not received additional funding from AFRL, but the company has continued to work on advanced microLED technology. Now, the company is reporting a bit of a breakthrough in microLEDs – a vertically integrated LED that can emit light from red to blue, including white – from a single LED device.

Details of the research results were recently published in AIP Advances under the title “Growth of monolithic full-color GaN-based LED with intermediate carrier blocking layers” for those who want to dig into the fabrication details. Here, we will summarize the results.

To start, let’s remember that conventional RGB LED displays are made with discrete red, green and blue LED devices or die. The red is based on InP technology while the green and blue use GaN materials. These two materials systems complicate the driving, cost, reliability, uniformity and efficiency of the final display. A full color pixel is composed of RGB sub-pixels arranged spatially, as in LCD displays.

In the new approach developed by Ostendo, a single LED can produce a full range of visible colors based strictly on the drive current. For example, the light emission changed from red (650nm) to green (530nm) and then to blue (460nm) at 15, 200 and 400mA, respectively. 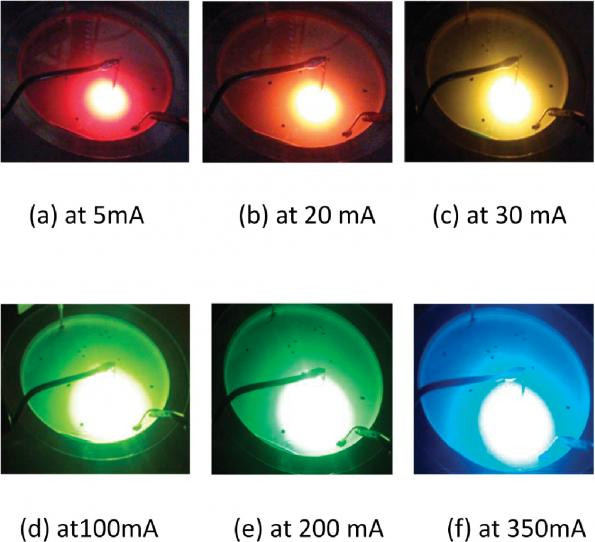 To be clear – this is a research result. We asked Ostendo to provide more details for this article such as the luminance levels of the various color, the size of the emitting areas and other details, but they declined. While the results are impressive, much work needs to be done to realize a commercial process. It will be many years before such devices could appear in market, we suspect.

Device Structure
In this paper, lead author Dr. Hussein S. El-Ghoroury who is also Ostendo Technologies’ Founder and CEO, described the structure of what he calls a “novel monolithic tricolor InGaN-based LED.”  A simplified schematic cross-sectional view is shown below. 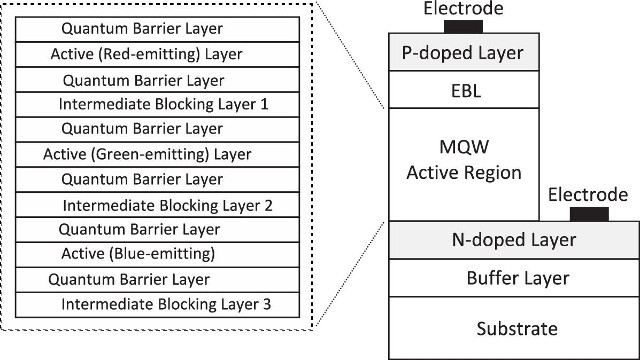 It is entirely fabricated using common metal-organic chemical deposition (MOCVD) processes, said El-Ghoroury, but the key to the device’s performance is the specially designed intermediate carrier blocking layers (ICBLs). These control the carrier injection distribution across the active regions of red, green and blue quantum wells stacked one upon another, effectively guiding the majority of carriers into the designed quantum wells so they would recombine and generate light.

While the quantum wells are designed to emit light at three principle wavelengths of 650, 530 and 460nm, additional colors are emitted as well, apparently by a simply variation in the drive current.

Some Performance Details
Interestingly, the device can operate in a photoluminescent mode or an electroluminescent mode. To induce photoluminescence, the wafer was illuminated with a 405nm deep blue laser. The LEDs emitted red, green and blue light simultaneously with a spectrum as shown below. 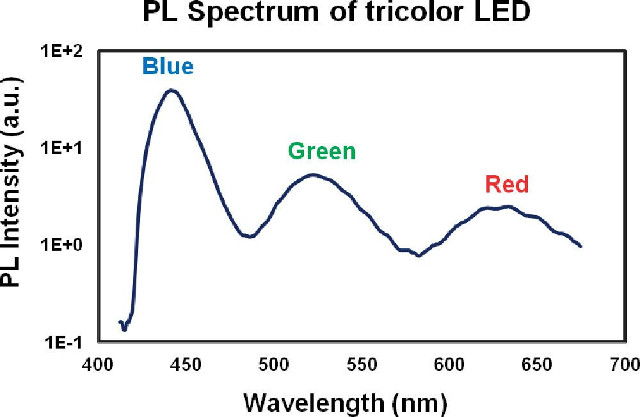 In the electroluminescent mode, different wavelengths are produced at different current levels. The normalized spectrum of thse emissions as well as the CIE coordinates are shown below. The dotted line color gamut is not identified, but appears to be sRGB. The resulting colors exceed this gamut except for the blue-magenta region. 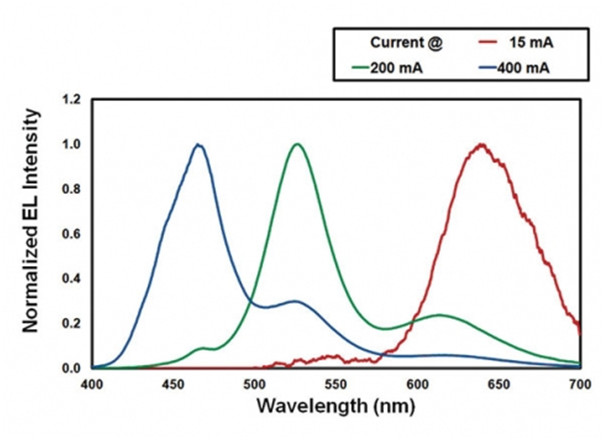 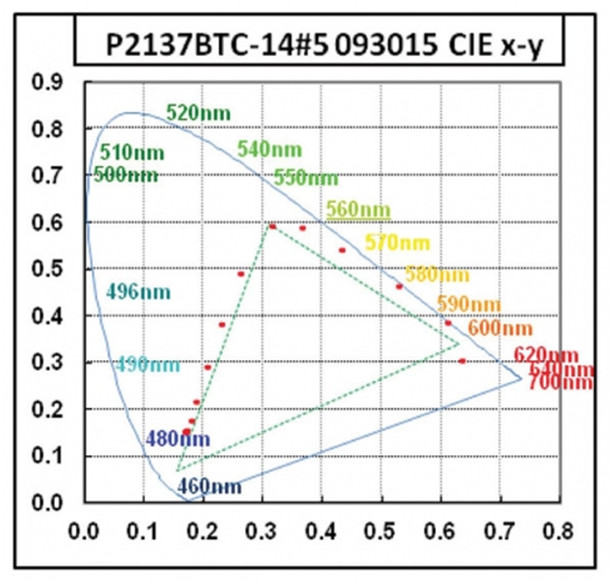 The research paper also notes several other organizations that are working on monolithic RGB LEDs, but none have taken the Ostendo approach that they are aware of. While it is still early days for this technology, the results are certainly encouraging and we will be following their progress.