Which is Better: Higher Pixel Density or Wider Field of View?

This is one of the key VR headset design decisions that product developers have been wrestling with.  So far, most have chosen a wider field of view leading to images that can look pixelated or have a “screen door effect”.  But with recent hardware advancements, it may be time to rethink this trade-off.

In a recent Display Daily article, What’s the Definition of an Immersive Display?, I discussed a number of elements that can contribute to “immersiveness” in a VR or AR headset.  In this article, let’s explore one of these elements of immersiveness a bit more: pixels per degree. 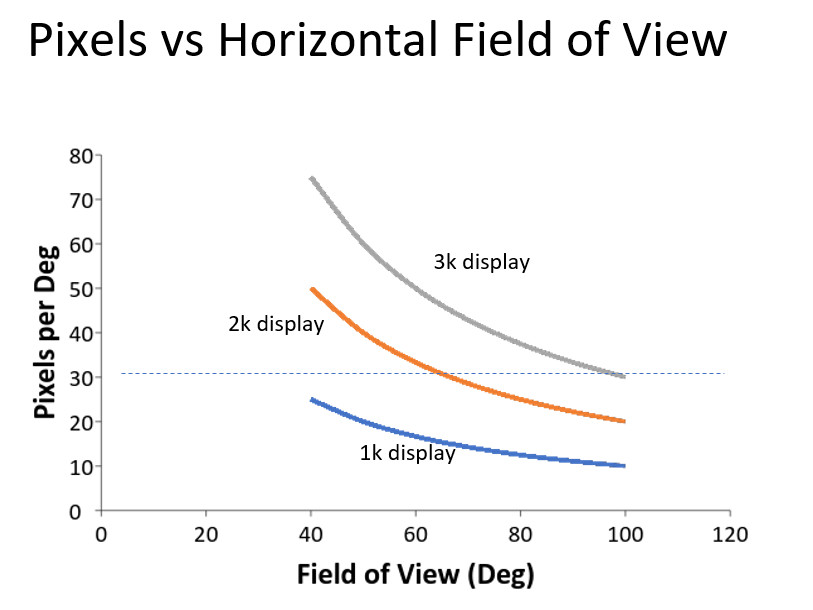 For example, if you want a 100 degree horizontal field of view and use a panel with 1080 x 1200 pixels per eye, you get 11 pixels per degree per eye if the optics are perfect and your eye is in the optimal lens-to-eye position.  The PPD per eye of the HTC Vive, Oculus CV1 and PlayStation VR headsets are all in the 10 to 15 range today.

We can also evaluate this image from the point of view of visual acuity, like the Snellen eye chart used to determine our visual acuity.  We all know that 20/20 is good vision, but what does that mean exactly.  Visual acuity can be calculated based upon the pixels per degree that the VR headset creates.  Assuming perfect optics, the current VR headsets from Sony, HTC and Oculus are in the 20/80 range.  But the magnification optics are never perfect so there will be a reduction in the actual visible PPD value or acuity, which is affected by many design choices.  Clearly, we have a ways to go to get to optical solutions that come close to the visual acuity of most people’s eyes.

Fortunately, higher resolution and higher pixel density displays are coming for use in VR headsets.  Kopin, for instance, has introduced a microdisplay panel with 2048 x 2048 pixels.  If used with a similar 100 degree horizontal FOV optical system as above, the PPD and visual acuity should be twice as good.  And, the company has 3Kx3K resolution panels on their roadmap, so even better visual acuity may be possible.

Now comes the key question.  Should VR headset designers use these higher resolution displays to:

No doubt some will argue that covering your peripheral vision with an image completes the sense of immersion as it mimics the human visual system.  The trade off will be the same class of acuity we now have, but maybe with even more artifacts.  Why?  Because the wider the FOV, the more difficult it is to make optics that do not distort the image.

The counter argument is that moderate FOV with higher visual acuity will produce fewer artifacts and the pixelation may very well disappear.

And what happens if these higher fidelity images are running at 90 or even 120 frames per second?  Now, the question of immersiveness comes back into play.  Is a 100-degree FOV image at 120 fps with no pixel structure and fewer optical artifacts more immersive than a 130-degree FOV image at the same frame rate but with some pixel structure and more optical artifacts?

I am not sure anyone knows the answer to this question as there has never been any research done to evaluate it.  Plus, you now need a definition of immersiveness!

To learn more about other design tradeoffs with VR headset design, check out this white paper.