CinemaCon runs this week in Las Vegas, which is always a fun show to attend as there are free screenings and previews of upcoming movies – if you have time to see them.  The show highlights advanced audio-video technology to popcorn machines as well as the business aspects of the exhibition and movie industries.  I am writing this on my first day of the event, but already some key themes are evident.

Trend one is projection technology.  Here, the major projector companies: Barco, Christie, NEC, Dolby and Sony all showed their newest RGB laser and laser-phosphor projectors.  These solutions are gaining increasing sales with Xenon-based system relegated to the value category going forward.  Sony made headlines with the introduction of an RGB laser prototype and Christie showed an integrated RGB Laser solution (their main solution features separate RGB laser and projection head modules.)  Barco now has a laser phosphor projector up to 33K lumens!

Trend two included announcements of new RGB laser projector rollouts.  These seemed to focus on “all laser” rollouts where multiplexes get RGB laser or laser-phosphor projectors on all screens.  Immersive audio is here and being rolled out rapidly.

Trend three might be motion effects.  Here, the idea is to add motion effects seating in theaters to offer an amusement style experience.  While some content is longer form, a lot is shorter form or alternative content.  MediaMation for example, announced a new eSports initiative that piggybacks on the trend toward live, large audience game-based sports.  This is pretty big in Asia and they hope to bring the experience to US audiences via an initial partner with TCL for the Chinese Mann Theater in Hollywood.

VR and multi-screen experiences are another way exhibitors are trying to entice audiences to continue to come to the multiplex.  Barco announced new content for their Escape three-screen format, while there were a host of VR demos and initiatives.  Some of these, like the ones from MediaMation and 4DPLEX, featured VR pods with motion as well. 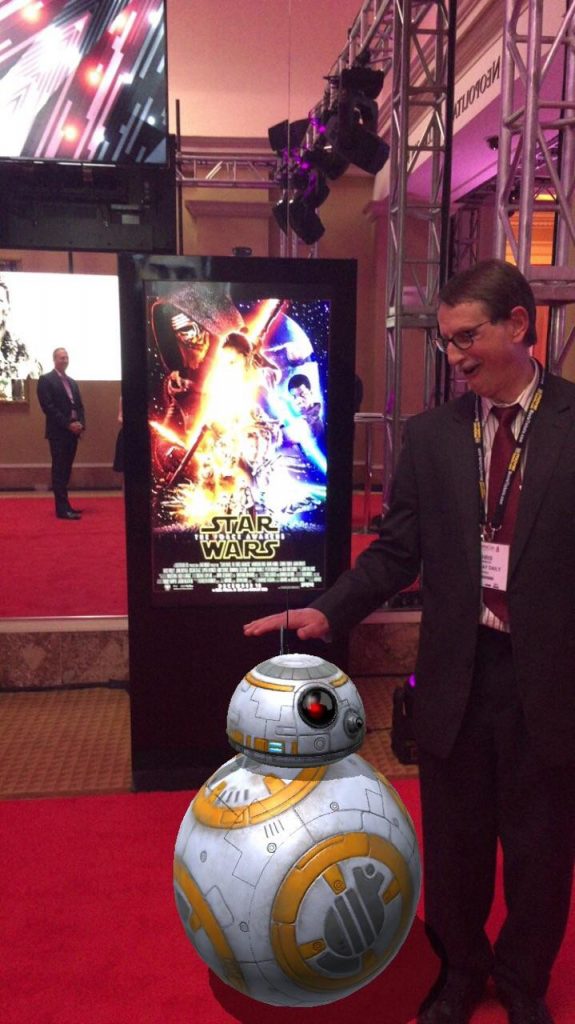 Lobby development has been an emerging these for awhile.  The idea is to add more screens that create a more unified experience for theater goers.  This means advertising, trailers, and special content – so kind of an extension of the pre-feature content to the lobby.  But it is going beyond this and mimicking the trends in the digital signage space with collection of video images and analytics on who is watching the digital content.  This can be used to sell advanced ticket, merchandise, popcorn and more.  Barco also showed a cute augmented reality demo designed to enhance in the theater lobby experience.

The company recently formed a partnership with VisionMedia, the main supplier of static movie trailer images for lobbies.  The two will now help to transition lobbies to digital formats, which they say is now a priority of the studios and exhibitors.

On the business side, one concern is discussion of narrowing the theatrical window.  This is the time that movies are shown exclusively in theaters before release to other distribution platforms.  Exhibitors want to make this time as long as possible to drive people to theaters, but there is growing pressure from the studios to offer some options to folks like Netflix to provide content within the window.

In general, exhibitors should be concerned about alternative content creators and distributors like Netflix and Amazon who are becoming both studios and distributors of original content at the same time.  Imitators are bound to follow.

Will this impact attendance and revenue at theaters?  Some exhibitors see this as just the latest threat not unlike TV, VCRs, PVRs, DVDs, Blu-rays, etc. – all of which were predicted to kill the theater business.  One AMC executive told me the theatrical box office is a really good predictor of the revenue potential for other forms of distribution so he does not see this platform going away any time soon.  But, he could not predict if theatrical will shrink or grow in the coming years.

Besides projection equipment, exhibitors have also been spending big on offering other amenities at their complexes.  This includes better seating, better food, liquor and other experiential offerings.  This is all in a bid to differentiate the theater experience from a home theater/TV experience.

Consolidation is also ongoing with smaller exhibitor chains being gobbled up by bigger ones.  For example, China-based Wanda has a plan to generate 20% of the theatrical revenue in 2020.  They are doing this by building lots of new theaters, especially in China and by acquisition, like the purchase of the AMC chain a few years ago.

The 2016 box office turned out better than predicted with a record year, but just barely.  Disney scored big with nearly 5 billion dollar hits from each of its 5 studios.  There is genuine optimism for the industry – this is a feel good event – but attendance number are basically stagnant in the US.   The international market is becoming increasingly important.  And, there is more and more scripted content is being created with the continuing dominance of Hollywood starting to be challenged.  With all these factors in play, forecasting the future of cinema seems rather difficult.