We are in the thick of writing up what we saw and heard at CES 2018, but I wanted to use this Display Daily column to identify some of my highlights and do a little deeper dive in the war shaping up between Google and Amazon over voice control of, well, everything.

Topping my highlight list is the “8K Full Spec HDR” display shown as a prototype in the Sony booth. This is reportedly capable of showing pixels at a luminance of up to 10,000 cd/m². Of course Sony has not revealed how many pixels can do that and for how long as there will undoubtedly be thermal management issues, but the display was extremely impressive. It was shown running identical content next to their current flagship Z9D TV with perhaps 1800 cd/m² of peak luminance and the 8K prototype just blew it away. It was almost like an SDR vs. HDR comparison, but was in reality an excellent HDR vs. incredible HDR demo.

LG Displays’ OLED roll up display was very impressive too. It has all of the picture performance you would expect from an OLED panel, with 4K pixels – and it rolled up into a box that was perhaps 12″ (30cm) deep by 15″ (37cm) tall. There are no commercialization plans yet, but I would not be surprised if this made it to market within a year.

Samsung’s “The Wall” was on my hits list as well. Samsung calls this a Micro LED based solution because the pixel pitch and the LEDs are both less than 1 mm. It is a module-based solution so you can build a 146” 4K display or even a CinemaScope version, if you wanted. Image quality is phenomenal.

Also impressive was Samsung’s 8K TV shown in their invite-only Innovation Room. This is an 88” model powered by an RGB LED backlight with thousands of zones. It reaches 4000 cd/m² of peak luminance with a huge color volume for out-of-this-world image quality. This should reach the market in the second half of 2018, but it will be pricey.

Turning to voice activation, one of the clear themes from CES 2018 was the heated battle between Amazon and Google over “voice share.”  While Amazon Alexa seems to have the edge in terms of products that are voice enabled, Google’s Assistant made big inroads into TV and related platforms at CES 2018. The table below summarizes some home announcements from CES. 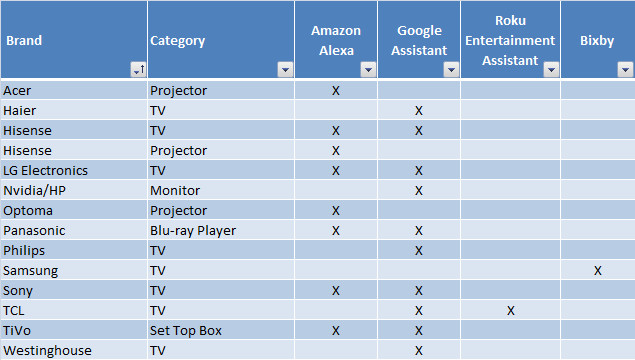 TVs using Google Assistant use the Android O/S as the operating system. These TVs will often integrate ChromeCast, as well, so content can be sent to the TV from the user’s mobile device. Such TVs typically allow control of the TV’s functions like volume, access to content, changing channels or access to settings, but such functionality varies from brand to brand. The aspects of navigation appear to be trickier. For example, simply “going back” from a search return creates a more complex hierarchy. That means some TVs will offer fairly rudimentary navigation until such navigation becomes more mature.

Many brands are also hedging their bets by adding Amazon Alexa support as well. Theoretically, this should allow you to send audio from your Google music account to an Alexa-enabled speaker or turns the lights off with your voice using the TV remote.

However, we are in the early stages of such capabilities.  Interoperability and learning the right commands will be challenging for the next few years. For example, some TVs require you to say “Hey Google” to get their attention. Others simply require you to say the command like “movie mode.” But you will likely need to know the right syntax to make it work. Every company touts voice integration and AI as a way to make life simpler and easier. But I don’t think that will be the case for the next few years.

The battle between Google and Amazon stretches beyond the home entertainment too into autos, appliances, mobile devices, retail, business, robots and more. It will be very interesting to see how skirmishes play out in 2018.