The Nanosys View on the State of Electroluminescent Quantum Dot Technology

Many Universities and display companies are working on ELQDs as a next generation emissive display technology. They hold great potential for bright, high contrast, wide color gamut displays. But to be successful, they will need to reach mass production with cost and performance levels that can rival competing technologies. And the competition seems to keep growing and evolving, so the benchmark keeps moving forward.

So what is the state of the art and what are the prospects for success? At SID DisplayWeek 2019 there were many papers on advancements in materials and device structures for ELQDs. I won’t try to summarize all those papers, but instead will focus on one paper given by QD developer Nanosys and R&D device fabrication partner, LG Display’s R&D Center. I also spoke with Nanosys CEO Jason Hartlove to get more up-to-date results and his prognosis for commercialization.

To begin, there are two camps of development: Cadmium-based and Cadmium-free. The Cd-based development is primarily coming from Chinese players and the Cd-free from everyone else. This mirrors the photoluminescent quantum dot arena with many major companies and countries having overt policies to not include heavy metals in finished products. That conviction is not so strong in China.

Historically, Cd-based photoluminescent quantum dot technology was superior to Cd-free, but that gap has narrowed significantly. That gap is also narrowing on the ELQD side, especially for external quantum efficiency (EQE), but lifetime still lags Cd-based ELQDs.

Development of ELQDs also has parallels to OLED technology as the fundamental device structures are similar and many of the same processing equipment can be used for both. Naturally, some of the materials and processing needs to be different, but like OLEDs, red and green are more mature than blue.

In the paper, the team reported the latest results for red, green and blue ELQD devices (not displays).  The figure below shows the EQE development history along with the current results for Cd-based and Cd-free devices. Note that the EQE for Cd-free is now quite close to the Cd-based results.

Is this EQE good enough, we asked Hartlove? “Not quite,” said. “We think an EQE of 20% is the threshold for commercial viability and we expect to reach that in about a year. Display as opposed to device EQE can be higher as optical engineering can be applied to extract more light.” Nanosys exhibited the RGB demo shown above at DisplayWeek.

What about lifetime, we asked next? “There is more work that needs to be done here, and like OLED, blue is the tough nut to crack. Some of the red and green Cd-based ELQD materials may now have the lifetime and EQE to be viable commercially, but blue still lags for a full color display. We think our Cd-free lifetimes and EQE are now some of the best in the industry,” said Hartlove.

Note in the lifetime data below that the vertical axis is the time to reach 50% of the initial luminance, a common metric for determining commercial viability. This data is only at 100 nits, a level too low for most applications, however, to be fair, most groups report results at this level so it makes for better comparison. A more typical luminance level of 500 nits is more representative, but lifetime degrade much more quickly at this level – “and not in a linear way,” says Hartlove. 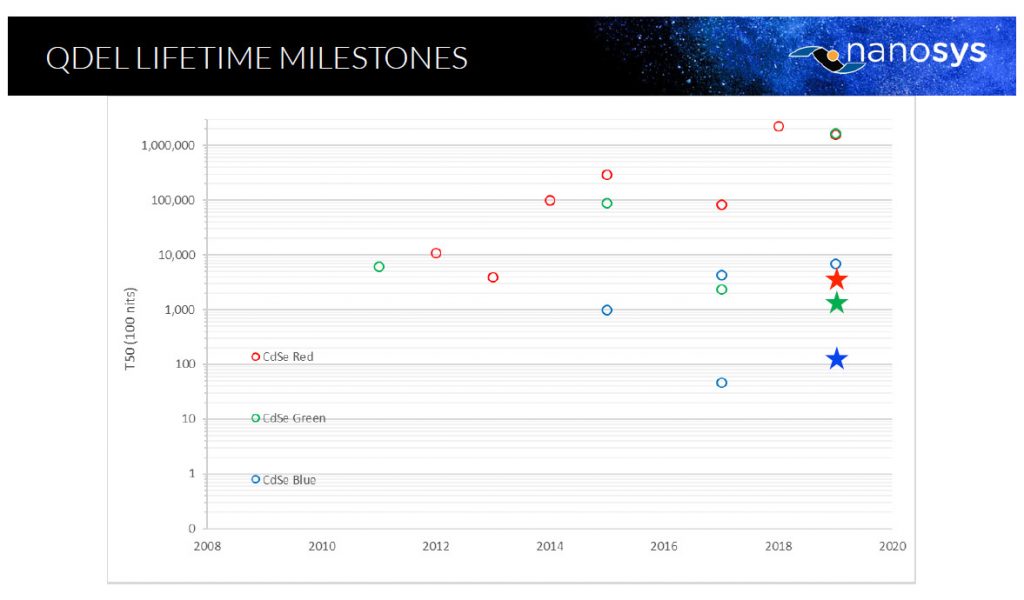 Hartlove didn’t say what the lifetime might be at elevated luminance levels but he references TADF developments for OLEDs where blue lifetimes are in the 5-30 hour range for higher luminance levels. He thinks their team can get to this level in about a year as well.

Nanosys is focused on developing a blue ELQD composed of a ZnTeSe alloy that allows for blue emission in the 450-460 nm range. InP-based QD can be pushed down to 460nm but with very low quantum yield (~40%). ZnSe quantum dots can be pushed upward to maybe 450 but with a similar low quantum yield.  By building a quantum dot with a little Tellurium in the ZnSe core, transitioning to ZnSe and then to ZnS, Nanosys can achieve blue light at 451nm with 80% quantum yield and a FWHM of 21 nm – all very acceptable values.

Nanosys is working with LG Display to perfect an all solution-processed approach to device fabrication. According to Hartlove, LGD has a complete solution processing facility for OLEDs that they are also using to develop ELQDs on. The goal is to use the same equipment but to develop new materials and processing to optimize performance for ELQD. Some of the layers and materials can be similar but others will be different.

Development is a complex process with interactions between materials and equipment and between layers above and below – all impacting performance, lifetime and manufacturability. The mobility of holes and electrons are different for red, green and blue and for each device structure, but maintaining charge balance is a critical goal. Suitable solution-processed charge transport materials is a particular challenge, for example.

The team also investigated quantum yield vs. shell size when the QD solution was assembled into a device to form a QD film (QDs in solid form).  Fortunately, these two maximum occurred at a similar shell thickness. The film quantum yield is an indicator of how efficient the ELQDs can be in a closed packed format (like in a ELQD device).  These results were positive as well suggesting it is the device structure, not the ELQD materials that are the limiting factor in device EQE.

Similar studies were then done on green and blue ELQDs to deliver the EQE results summarized above (red/green/blue at 16.9%/15.6%/12.4%). Hartlove sees ELQD materials reaching commercial viability for red, green and blue in the 2022 time frame. Once the materials are ready, someone will need to build a factory to start to make actual ELQD-based products. IoT indicator type displays might be one of the first applications, for example, but such products will likely appear after 2022, Hartlove wanted to make clear.

Initial products will have to find niche applications where other display technology may not be as competitive, so smaller, sunlight readable may be one good focus area. But Hartlove also sees the need for these to be very inexpensive, which is why they are focused on solution-based processing which offers this potential. In addition, the capex for a solution-processing factory will be substantially less (millions) compared to an OLED of LCD fab (billions).

It is a long way to get there from where we are today, and I think Hartlove is being too optimistic, but he has a better view of developments than I do. We will see.