A number of companies in Hollywood and beyond are already developing High Dynamic Range (HDR) content. But do they have accurate and calibrated HDR displays to master on? That’s the problem that SpectraCal is seeking to solve with its latest display evaluation software, CalMAN v5.6.

To be clear, CalMAN v5.6 is not just for HDR displays – it can be used to evaluate, calibrate and certify any reference monitor. In a recent conversation with SpectraCal President, L.A. Heberlein, we learned more about the needs of HDR monitor evaluation.

First of all, new HDR content also includes a wider color gamut than the 709 gamut for HDTV. While the UHD TV spec calls for content to be mastered to the 2020 color standard, that is not what the studios and colorists are doing. Instead, they are mastering to the DCI-P3 color gamut.

Why? Because there is no installed base of 2020-capable TVs, for one, and secondly, they don’t need the colorist to do a trim pass from the theatrical version to the home version. It turns out P3 is a good choice because the better versions of current generation UHD TVs can support a P3 color gamut, so color-accurate images should, at least theoretically, be possible in home sets.

“We don’t see wide color gamut calibration as a big issue right now,” noted Heberlein, “but HDR is different. This will require new instrumentation and new patterns and pattern generators to exercise these monitors.”

Monitors for mastering HDR content need to support multiple gamma curves. The most prevalent is the SMPTE 2084 standard called the Perceptual Quantizer or PQ curve developed by Dolby. The chart below shows digital code values vs. luminance for several gamma curves. 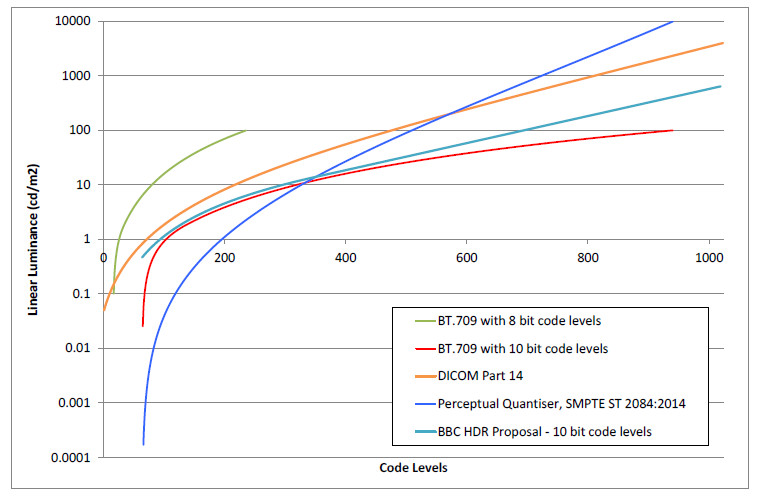 “We have developed new charts that allow you to visually evaluate how close the monitor is to the PQ curve,” claimed Heberlein. These can be shown in linear or logarithmic units.

CalMAN v5.6 with HDR support offers a direct-load 3D Look-Up Table (3D LUT) calibration functions. Heberlein explained that LUTs were originally developed to create a certain “look” that the colorist wanted. But is has evolved since then to be much more. “Instead of adjusting the monitor, we adjust the video stream so that the final result is correct. This takes into account the whole delivery system including coupling errors so that you always see a calibrated image. Such 3D LUTs used to take hours and hours to set up, but now we can do it in 10 minutes,” explained Heberlein.

Dolby Vision represents the most encompassing approach to HDR with lots of capabilities and room for growth, but less powerful versions are also going to come to market as well. Here, the leading approach is called HDR10.

“Dolby Vision thinks about the whole ecosystem and has rational procedures for managing how content is handled at each stage on the workflow – including to the TV,” noted Heberlein. “With Dolby Vision, you deliver a lot of metadata with the content and algorithms to determine how to render it depending upon the capabilities of the particular TV. This includes dynamic metadata which can re-render content on a scene-by-scene basis.”

HDR 10 is mastered to a set of luminance ranges (0.01 to 400 nits) and includes only static metadata, which applies to the entire piece of content, not scene by scene. It lacks the sophisticated luminance mapping in Dolby Vision and is more likely to simply clip content that is out of the luminance range of the TV.