Netflix has grown by leaps and bounds from a distributor of DVDs to a major content creation and distribution powerhouse. It is leading the pack in the distribution of UHD content and now looks like it plans to become the largest producer of content, powering past rivals HBO, Showtime and others.

The transition to UHD content is probably going to have more of a disruptive effect than the transition from standard definition to high definition. Not only does the transition require new content capture, infrastructure and distribution investments, now there are new OTT rivals that will seriously challenge the incumbents.

Netflix is probably leading the OTT pack right now – and seems to be hitting the gas pedal to become a dominant – and maybe disruptive factor. Case in point – it plans to spend $5B on programming in 2016 with about 10% going to original programming (in UHD & HDR). According to a Fast Company article, HBO, Showtime, Amazon and Starz plan to spend a combined $4.5B next year. It is not clear how much of that will be allocated to UHD content, however.

The chart below shows how aggressive Netflix is compared to rivals HBO and FX/FXX. 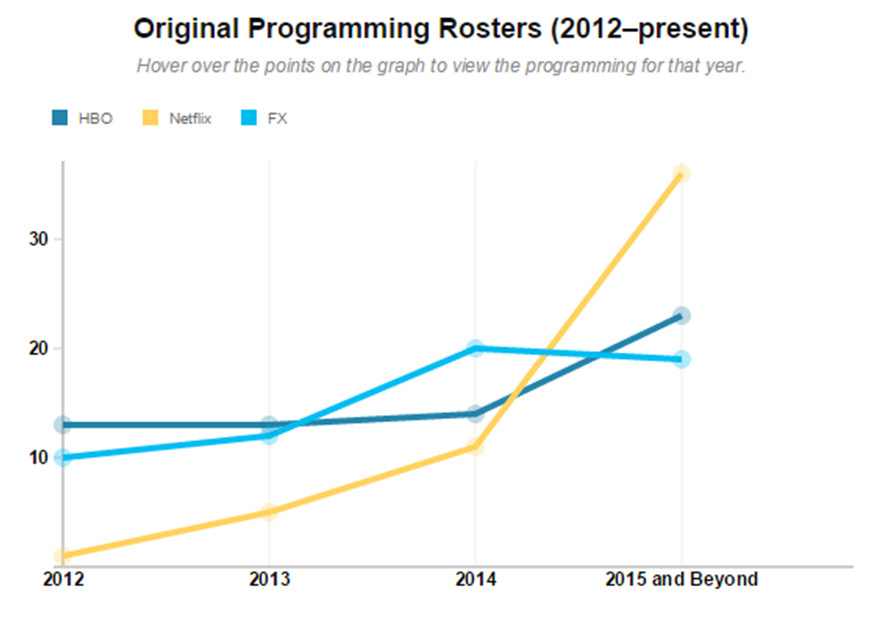 To quote from this article: Just before the February 2013 debut of House of Cards, Netflix chief content officer Ted Sarandos revealed his game plan for the streaming service. “The goal,” he told GQ, “is to become HBO faster than HBO can become us.” More than a few TV-industry insiders dismissed Sarandos’s statement as bluster, tough talk from a Silicon Valley outsider playing to investors and the tech media. But by at least one major metric — the size of its original programming roster — it turns out Sarandos wasn’t bluffing.

HBO has been in business for 40 years and is only now starting to embrace the Netflix business model by offering its content as a standalone streaming service without a cable subscription. OTT is clearly starting to go main stream. Besides HBO Now, other existing services include CBS All Access, Dish Network’s Sling TV, Viacom’s Noggin, Showtime’s All Access, Sony’s PlayStation Vue, Shout Factory TV, AMC’s Shudder, and expected offerings from Comcast, Apple, Verizon and others.

But only a few are pioneering streaming of UHD content such as Netflix, Amazon, NanoTech and BT. For example, BT in the UK is now expanding its UHD sports delivery programming while NanoTech here in the US, has announced plans to offer HDR content, adaptive bit rate encoding using MPEG-DASH and improved quality of service by using the Verizon Digital Media Services, with its world-class CDN. Hitbox is planning a 4K gaming sports service as well.

Remarkably, the vast majority of profits at Netflix comes from its DVD-by-mail business that still earns hundreds of millions of dollars whereas the streaming business is only expected to break even in 2016, according to The New York Times. Yet, it seems to be doubling down on new content and cutting edge technology and delivery. They are looking where the puck is going, not where it has been.

But prices are expected to rise soon at Netflix, especially for the premium packages. Its most popular base package, which does not include streaming of UHD content, we believe, costs $7.99 per month compared to the $15 per month that HBO charges. The reason the costs are higher at HBO, say analysts, is because they rely on third party partners which reportedly adds 30% to the cost of the service. On the other hand, HBO is much more profitable than Netflix.

So, will Netflix raise prices to become more profitable or will HBO do what it needs to do to lower subscription fees and gain share over Netflix, perhaps at the cost of decreased profitability? That’s an interesting question. – Chris Chinnock