MicroTiles LED Offers Nice Innovations that Could be Disruptive

To dig a little deeper into this new product category, we spoke with Dave Veroba, Manager, Marketing Programs – Enterprise at Christie Digital.

What was innovative about the DLP-based MicroTiles was their small square form factor. It was basically a scaled down cube design, but the small size and form factor opened up new design options where rectangles had ruled. The product was a hit with integrators and eventually created imitators.

Fast forward to 2019 and projection solutions are not what they once were in the market. LEDs are taking over and fine-pitched LEDs are creating very compelling images that can be viewed at close range. So why did Christie introduce a new LED-based MicroTile instead of creating a new series in their existing LED video wall solutions? The answer really come down to the strong brand that MicroTiles created for Christie, explained Veroba, and the innovations associated with that brand.

The rationale behind the MicroTiles LED development was to address some of the key pain points that integrators and end users have with more conventional LED video walls. Veroba described these as the multitude of points of failure, the complexity of management and maintenance and the difficulty of the install. The solution does address these pain points and then some offering some unique and state of the art features.

The solution starts with the way the system is designed to be installed. Conventional LED systems required a support structure and the hanging of cabinets on this structure with lots of time spent doing very precise alignment so the screen is planar and the seams between cabinets are not visible. MicroTiles LED solves this problem by creating an array of mounting points (wall anchors) on the wall which are carefully aligned. A mounting sheet attaches to these anchors and mounting plates go on top of that.  This forms the main permanent structural elements of the wall.  Everything that attaches to this now fits into precisely aligned points, thus eliminating any additional alignment.

The removable elements consist of the metal chassis upon which three LED modules are magnetically attached.  Any of these LED modules can be replaced and the system will automatically calibrate with this new module in place. The result is a “cabinet-less” LED videowall. That is a pretty cool innovation.

There’s an added benefit: installers can create the whole solution without the actual LED modules ahead of time as these are the long lead item. When the LED modules arrive, you just pop them on the chassis. That gives end users and installers more flexibility to build out the system. 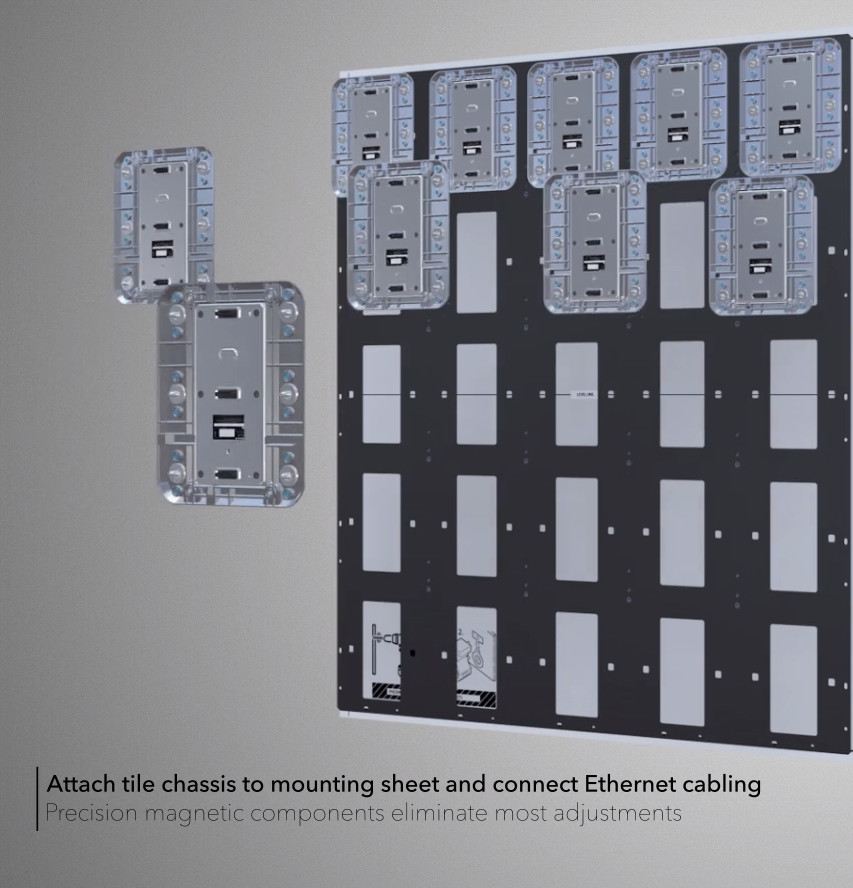 To create a videowall solution requires multiple MicroTile LED along with other components and cabling. This is shown in the graphic below, which shows the architecture for a wall with 1920×1080 resolution requiring a matrix of 10 x 5 1.25mm MicroTile LEDs. Every eight (8) MicroTile LEDs is controlled by what Christie calls an “Octroller.” Each of these delivers power and signal all over a Cat 5 cable to each MicroTile.

The “remoting” of the power and signal processing off of the LEDs themselves is not new, but delivering power and signal over Ethernet cable is, Christie says. This is done using the 10 Gbps transmitters and receivers that are part of the SDVoE consortium that has developed this standard for the ProAV community. This is the first time we are aware of that a video wall has implemented such a clean and simple solution (plus eliminating the paint point of fiber optic extenders when using HDMI cabling to the remote location). Christie says the Octrollers can be located up to 60 feet (18m) away from the video wall. Remoting these elements allows for redundancy of the power supplies and processors in a separate location for mission critical applications and it minimizes the heat and thermal loading at the LED screen. All of this helps to increase reliability and eliminate points of failure.

The octroller provides ‘centralized processing’ for up to 8 tiles to keep tile electronics simple. It provides high quality scaling, automatic color / brightness management, per pixel uniformity management, and tile management. Internally, there are two bi-directional 40Gb/s high speed interfaces (QSFP+ passive/active cables) and the 8 RJ45 jacks to drive signal and power out to the MicroTiles.

Also co-located with the Octrollers will be power supplies, an LED wall controller and various sources of content. Should the canvas be unusually large or have an custom shape, one can add the Christie Spyder or Pandora’s Box controller to manage the content at a higher level, feeding signal to one or more wall controllers. Cat 5 cabling also connects the wall controller to the octrollers and Cat 5 is used between MicroTiles as well.

Christie also says the MicroTile LED solution allows for concave and convex shapes for the videowall as well as inboard and outboard 90-degree configurations. This is all possible because of the design and the ability to custom laser cut the mounting plates to fit a specific application. A 3-degree tilt between tiles is possible for concave and convex walls, as is being shown at ISE this week. Out 90-degree corners can be achieved with a small 5 mm gap.

We also reviewed the specifications for the MicroTile LEDs, which can be viewed at http://www.microtiles.com/#section-intro. First, the LED modules are available in 1.25mm or 1.5mm pitches. That works out to 192 x 216 pixels per MicroTile for the 1.25mm pitch and 160×180 for the 1.5mm pitch. The MicroTiles are physically quite small – only 14” in diagonal. A FHD resolution wall with a 1.25mm pitch would measure 2.4m wide x 1.35m high x 85mm deep.

They use conventional SMD LEDs, but Veroba says that the Christie engineers are looking at miniLED and microLED solutions as well. If these are commercialized, they could be plug-in replacements for the current SMD modules.

Performance is optimized for indoor use with peak luminance pegged at 1000 cd/m² (not clear if that is in a window or full screen white). The Spec sheet lists the contrast as >5000:1 suggesting a conservative value since Veroba told us the practical black level is 0.07cd/m² (first gray level), suggesting a contrast closer to 15,000:1. Since the display can support HDR10 content, the 5,000:1 contrast is marginal performance, but 15,000:1 would be much better, especially in a darker room.

The MicroTiles are also offered with two color space options: DCI-P3 and NTSC. Since no one really cares much about NTSC that I am aware of, this may be the name they are using for primaries to support Rec. 709.

Interestingly, Christie claims 97% uniformity of the luminance and colors across the LED video wall. They achieve this by first calibrating each MicroTile at the factory, then using an internal monitoring and calibration technique once installed. We suspect this is a tool that monitors the current at each LED and applies a correction matrix (LUT) to create a uniform image. Continual monitoring allows this LUT to be updated to maintain uniformity. If that is not good enough, Christie can also do a camera-based calibration.

The wall controller comes in two flavors. The E1100 supports inputs in a 10Gbps SDVoE format, Quad 3G-SDI or 3G-SDI. The E1000 features two HDMI 2.0 and two DisplayPort 1.2 interfaces for content. A web interface allows the controlling and monitoring of the video wall from your phone or tablet using a web-based app. These inputs can support up to 12-bit 4K content at 120 fps – and this can be delivered to the MicroTiles as well (maybe not at 12-bit, however).

Pricing will be a bit higher than Christie’s other LED videowall products with mass production slated for May.

Christie certainly does seemed to have addressed some of the pain points they wanted to solve while establishing a platform that can accommodate improvements going forward. I hope to see one live sometime soon.