Location-based VR is the Right Next Step

This is a feeling I have had for some time, but this was driven home today based on my tour of the brand new IMAX VR Center in New York. This is the second center and the first inside a multiplex (the AMC Kips Bay 15 venue).

According the IMAX CEO Rich Gelfond (center in photo), who spoke at the event, eight more will be added before the end of the year in the U.S., Canada, the U.K., France, the Middle East, China and Japan.

What was clear from the comments of Gelfrond and Adam Aron, CEO and President, AMC Theatres (left in photo), is that IMAX VR needs to be a premium experience, but it serves two other very important functions as well. For one, it needs to be viewed as a business venture, meaning it should make money for AMC and IMAX. And two, this is step in the transformation of the multiplex from a place to see movies to an experience destination. That means it’s a place where young people and families can hang out for hours, with watching a movie just one of the ways to be entertained. (Gelfond also noted that 70% of those at the VR center are millennials and Gen Xers)

So why is location-based VR the next right step? Primarily because it provides a platform to offer high quality content and hardware that can remain on the cutting edge allowing customers to experience this for a modest fee (IMAX thinks pricing in the one dollar per minute range is the right place to start). PC-based VR is too expensive for most consumers and the smartphone-based experience is sub-par, said Gelfond. And, they all suffer from lack of content.

But Gelfond believes that if consumers are going to experience VR, then you need to have their first experience be a really good one, which the location-based venue offers. In content, IMAX is putting its money where its mouth is. The company recently established a $50M VR Content Fund and is in advanced stages of discussion with several content developers, including Hollywood studios and gaming publishers, to produce and distribute high-quality VR experiences to its VR centers.  In addition, IMAX recently announced a new co-financing and production agreement with Warner Bros. Home Entertainment to develop and release three premium, interactive VR experiences based on some of Warner Bros. Pictures’ most highly anticipated upcoming blockbuster films. 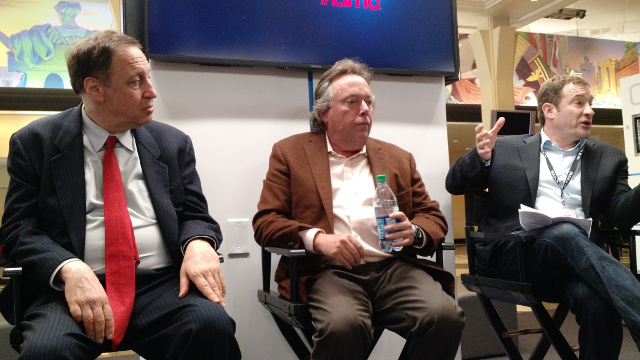 On the technology side, Gelfond admitted that the VR experience is not as good as it should be, but it is a “good beginning.”  Part of the current experience includes multi-person VR experiences from pod-to-pod, but they have plans to extend this to center-to-center. The pods are also rather small today, 12’x12’ (3.7 x 3.7m) or so, but they are working on room-sized solutions as well.

IMAX’s Chief Business Development Officer, Rob Lister (right in photo), said that IMAX wants to be technology agnostic and add new technology as it matures. Current pods use headsets from HTC and Starbreeze, for example. But the use of eye tracking for foveated rendering and to adjust the virtual focal length of the image and the interpupillary distance – all based on that user – are in the lab as well. Plus, the company is working with Google to develop a cinema-grade VR camera that should be ready as a prototype by the end of the year.

Lister also noted that the design of the VR center is supposed to be sleek and afford a way for your friends to watch you doing the VR pod demo. But the layout is quite adjustable as the pods will need to be installed into a variety of spaces at other multiplexes (it’s to one side of the large entrance lobby at the Kips Bay AMC). He thinks the right length for VR experiences today is 7 to 12 minutes. 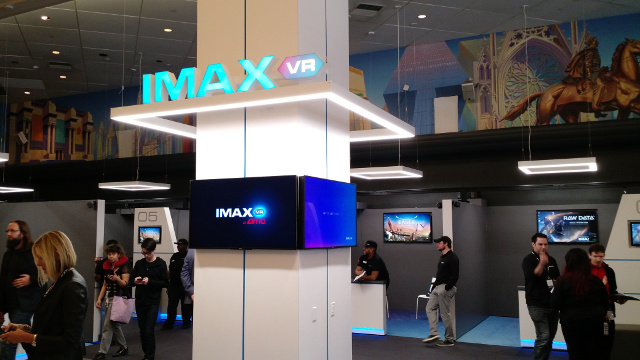 The fun part of the media event was trying out the various VR experiences. There are 12 pods and 7 different experiences to try out. Overall, I was more impressed with the demos than I was anticipating as the content does reflect high quality production values. Clearly, the headsets are not sufficient for a really compelling experience, but they will be a in a few short years, I am sure. Here’s the blow by blow:

The movie The Mummy opens today (June 9) and the VR experience is tied to the release – the first time a VR experience and movie have been released on the same day and date. The experience is basically a helicopter ride where you shoot mummies on the rampage, then you land and kill some more. This is the only demo using the Starbreeze VR headset. It offers the very wide 210-degree FOV using 5K pixels from two displays.

As far as image quality, it is actually similar to the HTC Vive with pixel structure visible and not all of the image in focus at once – but this is a common complaint over all the demos. The difference is that you now have some peripheral vision so you can see mummies coming up on you from the side. You have to keep moving your head with headsets with a more narrow field of view to scan the scene, but with the Starbreeze headset, I was able to keep my head more stationary and still wipe out mummies with abandon. 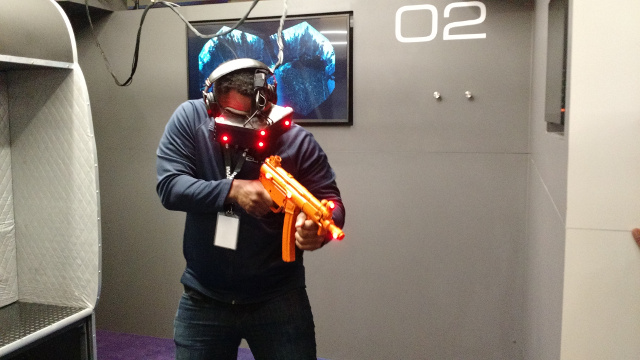 Tracking is done with sensors around the space and the LEDs on the headset and gun. The frame rate is 60 Hz and there was visible latency with faster head movements. The next gen headset is expected to increase resolution and go to 90 Hz.

This is set in a futuristic Paris where there are no longer people, just roaming animals. Once you put on the headset, you are a bird with your own beak and everything. The idea is to fly around and pass through a series of rings set up in the city. You “fly” by simply tilting your head forward or backward or side to side. I found it quite natural and easy to do and it was fun trying to fly through the hoops, but there is no real story line in this one. 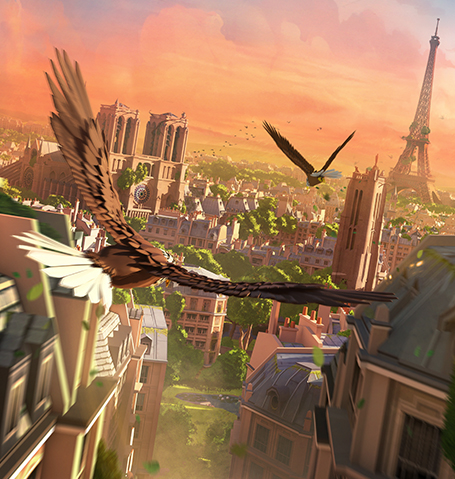 This a multi-player shoot’em up where your hand controllers wield a gun or sword and you need to kill robots. It is a multi-player game so two sets 3 players can participate in the action. Other players appear in the virtual space but you can’t see your own body except for your weapons. It was fun escapist entertainment. 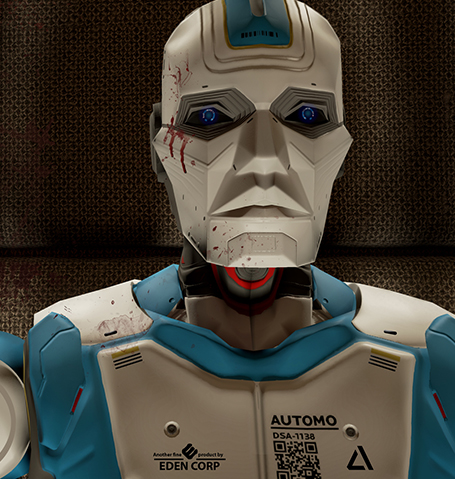 This was the most creative and engaging of the demos. Developed by Google, this app allows you to have a pallete of colors and other creative tools on one controller and the “paint brush” in the other. You can pick a color and begin to draw lines, shapes – whatever you like, in the 3D space you occupy. You can walk around your creation and look at it from different perspectives and more.

The basic pallete is great to show the capabilities and should be fun for the artist in you. But I suspect a more useful way to use this would be with a structured class or curriculum where the pallete might contain biology elements to you need to build a cell or architectural elements so you can assemble a building, for example. This is one where your imagination can really kick into gear. 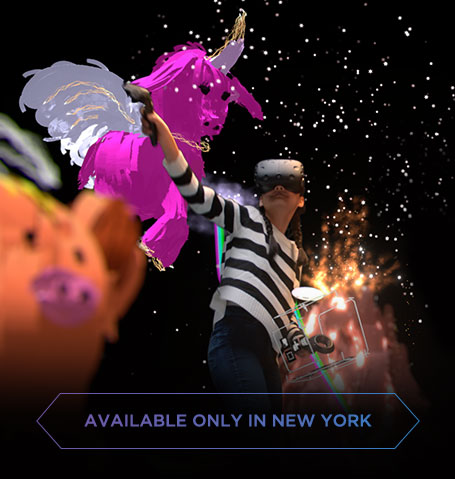 The walk is from the movie of the same name and you have to walk across a high wire between the old World Trade Towers (which was really done). There is a slightly raised element on the floor so you have to walk about 8 feet, turn around and come back.

If I was at the actual height of the World Trade Towers and looked down, I would definitely get a knot in the pit of my stomach. I did not get that in the VR experience and was easily able to walk back and forth without incident. I am not sure if that was because I have done a fair amount of VR and know it is not real, or what.

This was certainly not the case with other people, some of whom were terrified to get on the wire and could just not do it. Gelfond told a nice story about this experience where they had their first customers try it in a wheelchair (not quite sure how that worked). They said afterwards that this was the first time they actually understood what it was like to walk. That’s pretty profound. 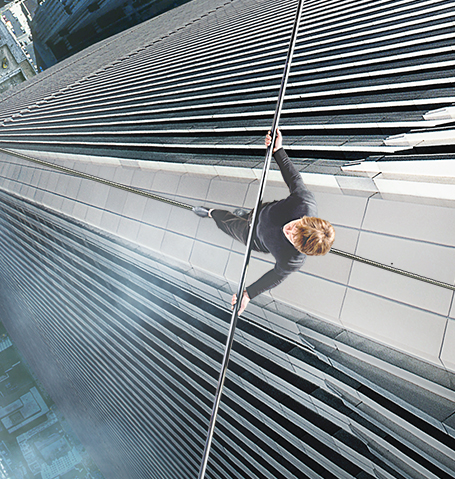 This is a nice little family cinematic short story in VR about two children getting a dog and falling into a land of dinosaur skeletons chasing them around. This is done with up to four people who sit in 4D motion chairs. It was a cute story with very vivid colors so should be fun for the little ones. The motion was not overdone. 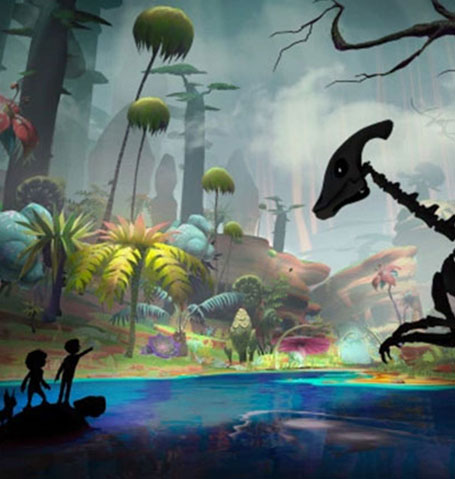 This is the only one I didn’t try. It’s a single player game where you don boxing gloves and try to defend yourself in the ring, throwing punches against this brute. Guys looked like they were working up a sweat in this one. 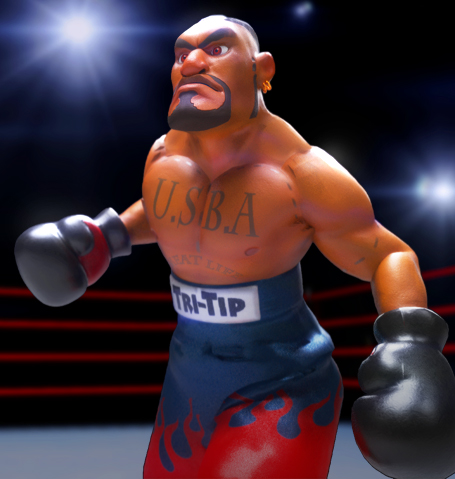 There you have it. If you are in NY or LA, maybe you will give it a go as well.