LightSpace Back with Volumetric Display

Some long time readers may remember the volumetric display developed by LightSpace Technologies.  The company never found a solid market for its product and went out of business.  Well, they are back with new models and improved performance.  Is the technology ready for applications now?

The LightSpace volumetric display is based on a single-chip DLP engine in a rear-projection monitor configuration.  To create a volume of images, they assemble a series of addressable screens like a loaf of bread.  They call these multi-planar optical elements (MOE) as they can be quickly changed from a transparent mode to a scattering mode allowing the image to become visible.  If these “slices” are shown fast enough, a volume of images is visible to the eye. 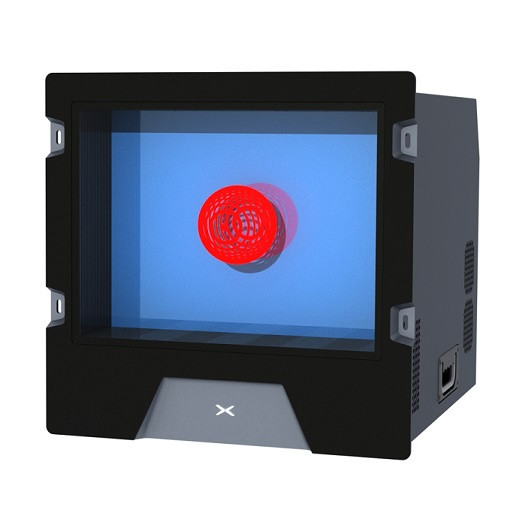 In previous versions of this display, the MOEs were composed of a single cell of Polymer Dispersed Liquid Crystal (PDLC) material.  But according to Osmanis, the new MOEs do not use PDLC, but a new LC formulation.  Details of this are only available with a signed NDA, we were told.  However, Osmanis did note that one of the deficiencies of the PDLC-based material was poor blue light performance.  This has been addressed with the new material.  Development was done by EuroLCDs in their fab.

Does the image on the furthest scattering sheet need to be a lot brighter than on the closest one, we asked?  Actually, no, stated Osmanis.  Any light has to pass thru the full stack of scattering sheets no matter which one is active at any time, so transmissivity ends up being the same.  However, from a perceptual point of view, one does want to modify the brightness at different planes to enhance the image, said Osmanis.

The company has three display models.  The second generation x1405 is available for ordering today with the x1406 available soon.  The third generation x1500 is in development and should be ready by early Autumn.  The table below shows the specs for the x1405 and the x1500.  The x1406 is apparently similar to the x1405 except smaller, lighter and less expensive.

Clearly, bandwidth is an issue with a volumetric display.  This is a single-chip engine, so it must run faster to create color images, and there are multiple image planes.  Conventional DLP imager chip sets cannot power this type of display, which is why TI created their Discovery spatial light modulator device, which has much faster addressing capabilities.  They apparently no longer use this name, so LightSpace uses the DLP 7000 DMD chip set for the x1405/1406 series, which supports 32K binary frames per second.  As noted in the table, this has XGA resolution.  The x1500 increases the resolution on the spatial light modulator to 2560×1600.

Currently, the color image is only 5-bits per color with a screen update rate of 20 Hz.  Osmanis says that they buffer the incoming data at 60-70 Hz, but the data distributed to the display is limited by the interface bandwidth (DP 1.2), resulting in the 20Hz refresh rate.  Osmanis says this won’t get any better with the x1500 as the data rate will grow from 15 Gbps to 60 Gbps.

While the company is moving to a quad DP1.4 interface which should offer an 8X increase in bandwidth (total of 129.6 Gbps), efficiently threading the data over these four pipeline won’t be that efficient, so better to be conservative here.  In addition, the frame rate will be limited by how fast the MOE elements can be addressed, so 20 fps is the top end for color image for now.  However, if grayscale only images are displayed, the company has the option to offer 12 bps at around 50 fps or 5-8 bps at around 100 fps. 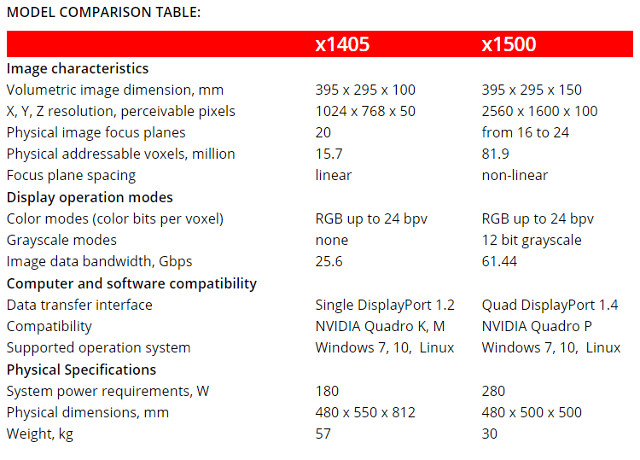 Also note from the table that the number of scattering screens is 20 in the 1405/1406 series and 16 to 24 in the x1500 series.  But, these list the perceivable pixels (or voxels) as having 50 and 100 levels.  Osmanis explained that this is indeed a perceived, not physical resolution based upon some studies they did with people.  The perception is of continuous depth and not a series of image planes.  This can be augmented by careful rendering of the images as well.

The volume of these displays is quite modest – 100 mm (~4”) and 150 mm (~6”).  This may be enough for some applications, but is limiting.  However, the company does have some IP that would allow the volumetric image to be created using a parabolic mirror system.  This would create a “floating 3D image” that would expand the size and depth range.  The two architectures are illustrated in the graphic below. 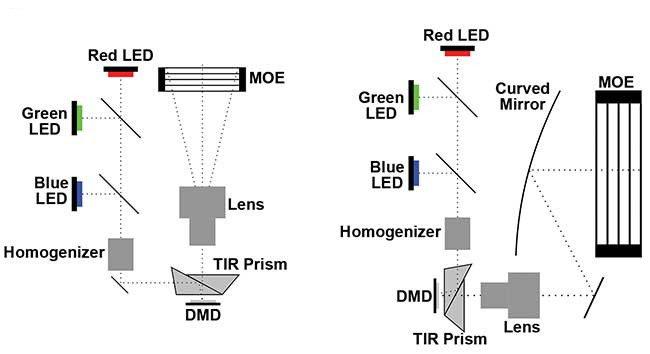 In terms of brightness and contrast, Osmanis says they have improvements to make here as well.  The current displays are OK for a dim room, bit for normal office lighting, they need to be brighter.  As a result, they are working to double the light output of their RGB LED solid state lighting source.

Content and content processing remains a challenge as well.  Currently, the company is focused on stereoscopic 3D applications where they think they can offer an upgrade solution.  For demo purposes, they have focused on CT and MR image sets as these are captured as slices and can be imported fairly readily.  However, a lot of image processing is needed to render this data on the display.  According to Osmanis, they basically build a 3D model of the data and map textures to it so operators can easily rotate and zoom the image.

Finally, Osmanis revealed that they are also working on a miniature version of their volumetric display which they are aiming at AR and VR applications.  Not much is being revealed yet, but this should also be ready by this Autumn.