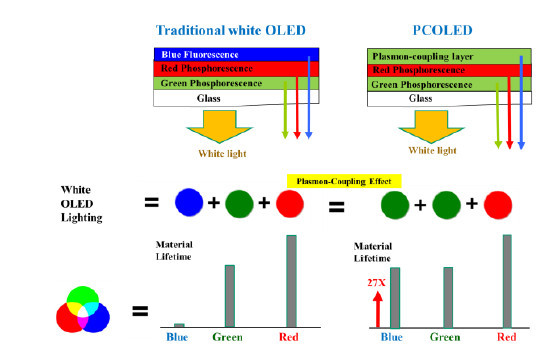 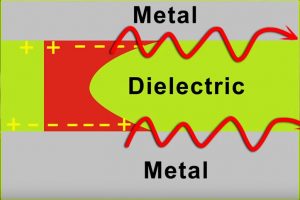 In a conversation with Dr. Ming-Shan Jeng of the Intelligent Energy-Saving System Division at ITRI, we first asked him to explain what a plasmon is.

“In a conventional organic-metal interface of an OLED, there is a collective oscillation of electrons, called surface plasmon,  created by electromagnetic waves travelling through the interface,” explained Dr. Jeng. “Normally, the TM component is converted to surface plasmons and the TE component passes through. In optical terms, the interface acts like a polariser, so 50% of the light is lost to plasmons as heat.”

“In the green phosphorescent material, there is actually a blue emission band in addition to the green one, but it is very weak. With the double metal structure, we actually generate more plasmons and shift the probability for emission from the green to the blue band. This is not an upconversion process but merely a change in conditions within the green material,” said Dr. Jeng.

Dr. Jeng explained that this condition was discovered by accident when they were doing another experiment on light out-coupling and saw some blue emission. As they dug deeper, they realized the potential of the discovery and so focused on developing the PCOLED technology.

To date, they have developed 10×10 and 15x15cm samples. The characteristics of the blue light and materials are shown in the table.

Dr. Jeng noted that ITRI’s role is to develop technology and seek commercial partners. This typically takes the form of a license and royalty model. So far, ITRI is working with a local company, named WiseChip, to begin commercialisation of the PCOLED structure on a passive matrix OLED line. Passive matrix technology is easier to manufacture than active matrix, so it made sense to begin commercialisation efforts with the easier process.

Dr. Jeng says that the same equipment can be used and no new equipment is needed for PCOLED. Naturally, the materials and processes change, but this change is reversible, he thinks.

The substrates for this line are small and the first prototypes have just been completed based on this modified line. However, it is likely to be another 1-2 years before commercial products appear.

It should also be noted that this is a vacuum deposition OLED manufacturing process so it may be better suited in the short term for display, as it is likely too expensive for general lighting. But Dr. Jeng is already thinking about solution processing as well, which has the potential for much lower costs. He hopes to start a program on this in a few years. – CC