HMDmd and Kopin: A Powerful Partnership for State-of-the-Art Surgical Visualization

According to a recent press release, start-up HMDmd is announcing the availability of their Development and Evaluation Kits (DEK21) – a pre-clinical prototype wearable display designed specifically for use in surgical and interventional medicine applications. Dubbed a “combined reality” headset, the unit presents high-resolution 3D video view of the real-time surgical anatomy plus relevant case information while also providing a look-down and peripheral vision capability critical for situational awareness.

While wearable medical devices have been commercialized before, none have gained widespread or consistent adoption. Often this is because they have been products designed primarily for consumer use. But the underlying technology has continued to advance. HMDmd, now believes that their new medical grade device, designed and constructed in partnership with Kopin for this precise purpose, is at a maturity of performance level which meets the demanding visualization requirements of minimally invasive surgery, digital surgery, surgical robotics, microscopy and interventional disciplines.

HMDmd told us that the product has been developed with extensive input and review by surgeons and physicians throughout the design process. Based on this positive feedback on the design and capabilities, HMDmd now plans to enter discussions with prospective strategic OEM distribution partners seeking to integrate a state-of-the art wearable display with their minimally invasive and robotic systems, surgical microscopes and interventional systems. Specifications of the DEK21 (which can also include branding and other customized elements in production quantities) are described below:

The images below show the current DEK21 unit (pre-clinical prototype) which uses an industry standard headband. Also shown is an image of a production version with a customized headband. 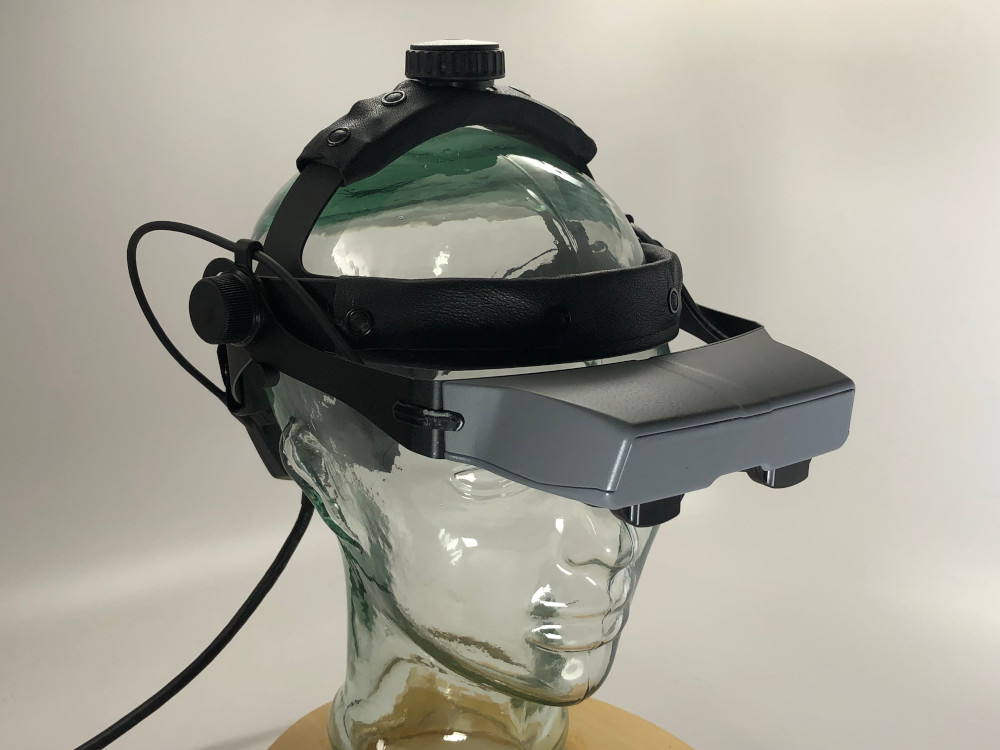 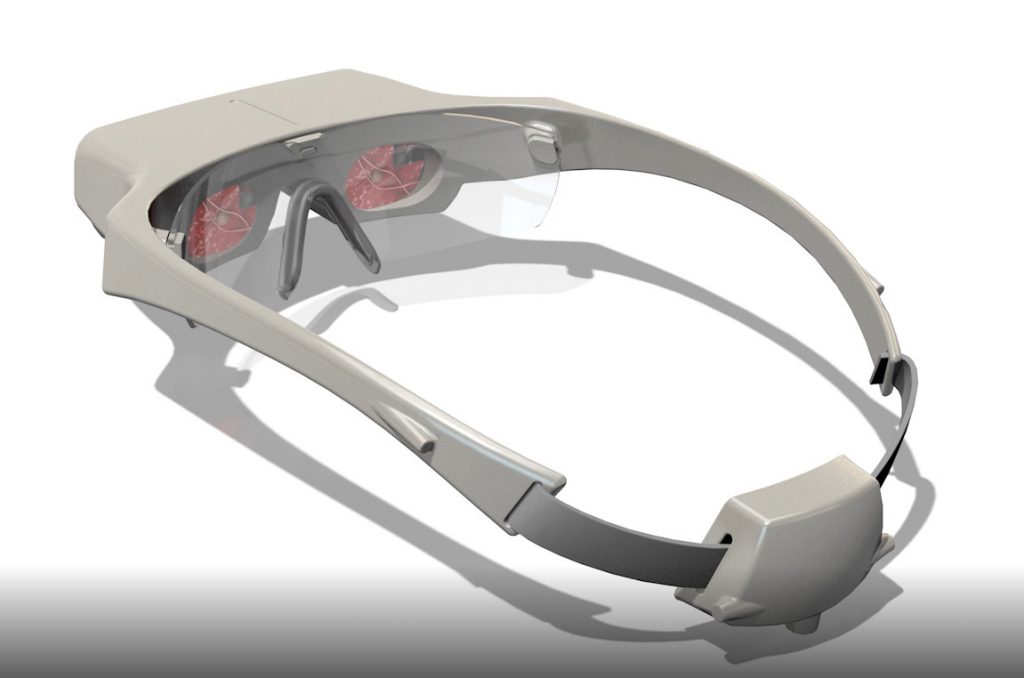 To understand why the partnership between HMDmd and Kopin is so effective in this context, it is best to start with a little history of the two companies. On the HMDmd side, the key founders have extensive experience in the market segments being targeted. Back in the 1990s, HMDmd’s principals pioneered wearable displays for surgery while at Vista Medical Technologies. In partnership with Kaiser Aerospace, they commercialized the first FDA-cleared head-mounted display. The system was on the market for several years.

According to John Lyon, CEO and Co-Founder at HMDmd, the resolution level of available microdisplay components did not keep pace with direct-view monitors, and so the Vista product was eventually withdrawn from the market. The founders, however, remained passionate about the game-changing advantages of wearable displays in the OR, and started HMDmd as soon as the current generation of microdisplays became available. “Our new headset incorporates all the design and human factors lessons we learned working with surgeons in the market, combined with the performance level of current components, including the OLED microdisplays,” noted Lyon.

When HMDmd was founded, Lyon contacted Bill Maffucci, who had managed their project at Kaiser Aerospace and is now Vice President/General Manager at Kopin Corporation. The two companies agreed to partner, with Kopin granting HMDmd a global license to its extensive intellectual property portfolio applicable to wearable displays, exclusive for the surgical and interventional medicine field of use. Kopin will design and manufacture the wearable head-worn system and is a significant minority equity stockholder in HMDmd.

“Current microdisplays offer much better resolution, color, contrast and accuracy than the panels we used in the 90’s,” said Maffucci. “We chose the field of view to provide 55 pixel-per-degree image quality, which is very near the 60-pixel-per-degree of 20-20 vision. Also, the drive electronics and panels are 24-bit so we can provide very accurate color in addition to monochrome images. Today’s components allow us to significantly improve the size, weight and power consumption of the units, and Kopin’s custom-designed optics provide clear, sharp images that are so important to the surgeons.”

But it is not just the quality of the electronics and OLED panels which gives the HMDmd display a substantial competitive advantage: it is Kopin’s deep, 30-year experience in developing and manufacturing head-mounted display modules, optics and headsets for critical applications. To complement this expertise, in 2015, Kopin also acquired a company called NVIS which focused on high-end HMDs for military applications, including advanced simulation. This is the core engineering team working on the HMDmd platform, in close collaboration with the HMDmd founders who provide the domain expertise via their network of clinical advisors and industry relationships.

The first wearable display from HMDmd will accept stereoscopic images in several conventional formats, like side-by-side or top/bottom, in a single video stream. But each panel will get a FHD resolution image as the side-by-side format is 3840×1080 (1920×2160 for top/bottom). This also allows for the simultaneous display of the left and right-eye images.

Stereoscopic images can create concerns about the vergence-accommodation conflict which may cause discomfort for the user. This conflict arises when the image is displayed at a fixed distance so the eyes must focus (accommodate) there, but the disparity of the image may present an image at a different depth plane, which is where the eyes converge (toe in). In this critical element of the design, HMDmd benefits from Kopin’s extensive experience. Maffucci emphasized the point: “We have learned a great deal about how to manage the depth and disparity of the image to keep it within the comfort zone.”

This experience is also leveraged in the design of the low distortion plastic optics which will be used in production units. “We know how important it is to correct for distortion in the optics and field curvature, and to align the panels and optics very carefully for optimal 3D. We also include an adjustment for the interpupillary distance and the facility to insert lenses with an individual’s corrective prescription,” continued Maffucci.

Deep experience in the field is also key in the ergonomics of the design. The weight is less than that of a typical bicycle helmet. Equally important, said Maffucci, “we were very deliberate in keeping the center of gravity located at the middle of the wearer’s head which minimizes neck strain, particularly critical during long procedures.”

The consideration of human factors has been a driving force in the design. Allen Newman, a co-founder of HMDmd, has directed the evaluations of the prototype with surgeons and physicians from the target clinical specialties. “We are very close to the customer” said Newman, “and have a real appreciation of the physical demands which surgeons and physicians face in today’s operating rooms and interventional suites. We firmly believe that wearable displays, with the highest levels of technical performance and their unique ability to combine superb resolution with real-time actionable data, are a key component of the advanced systems which are transforming surgery and interventional disciplines.”

Lyon concluded with HMDmd’s vision for the near future. “We think that wearable display systems, specifically designed for clinical purposes both in terms of technology and ergonomics, will be ubiquitous in the operating and procedure rooms of the world during the next decade.”