Metrology is the art and practice of measurement and the International Committee on Display Metrology (ICDM) is devoted to developing display measurement methods. At the SID DisplayWeek in LA this week, the group organized their first all-day workshop on the topic. Over 90 people showed up, far exceeding the workshop organizers’ expectations. I asked a number of people what they thought of content and all agreed is was high quality and it was a worthwhile event.

The day started with an introduction to light measurement basics by Ed Kelley, a former NIST staffer who was the editor behind the 500+ page version of the current display metrology handbook. He drove home the difference between radiometric and photometric measurements (photometric data is scaled to the average response of the human eye – the so-called V(λ) curve).

Some of the history of color science was discussed along with the implication of using RGBW display architectures. He pointed out that when arbitrary amounts of white are added to the signal, it boosts the overall luminance of the image, but it will desaturate colors (as is common for DLP projectors in a bright mode). However, the white segment can be unused in projectors (cinema mode) for more accurate colors while in OLED panels, it is used as an efficiency and lifetime extending measure. In this case, the white component of the color of any pixel (the combination of the RGB elements), is subtracted from the signal and delivered to the white sub-pixel. The much lower RGB signal components can then drive these sub-pixels to change the color. This does not desaturate the colors, but lowers the drive current to the RGB OLED subpixels, reducing energy and extending lifetime.

Michael Becker, another well known metrology expert from Instrument Systems, noted that CIE, the color science group, and ICDM, are both fundamental organizations that support other standards bodies like IEC and ISO. He said that IEC focuses on developing measurement methods for particular applications and sources basic measurement techniques from ICDM. ISO focuses more on the human interaction with a display such as changing performance and perception with ambient illumination, again, relying on ICDM for metrology guidance.

He then described some of the work he does in his lab, which is mainly focused on the automotive industry. Automotive is one of the most demanding applications for displays, so Becker needs to characterize performance over a range of temperatures and with many types on illumination hitting the display from many angles. He is trying to understand how the colors, contrast and many other factors change.

Becker and his team also do work on high performance displays, but it is becoming increasingly difficult to characterize such displays. The reason is what he calls the “magic box”, which describes a whole family of image processing that takes place between the basic incoming RGB signal and the final image on the display. This includes steps like EOTF matching, dynamic contrast techniques, motion blur reduction, color boosting and more. The result is that metrologists often measure the combination of image processing and panel performance with the basic panel performance nearly impossible to access in many products.

You Need Instruments to Measure

Next, three metrology instrument companies described various device architectures that are available for measuring radiometric and photometric properties of displays. Kevin Lange from Konica-Minolta described some of their colorimeter products. He noted that radiometric products are often more accurate than photometric products, but they are often slower in data capture, which is a major practical consideration. Creating single-channel colorimeters with a filter that replicates the human eye response is very difficult and expensive. He then described the three channel architecture with filters to approximate the human color matching functions (XYZ) to mimic how our eyes detect light.  These are rather broad band filters and he cautioned that you must be careful when measuring narrow band sources like OLED, quantum dot, RGB LED and laser-based displays. If the peak output of the source does not line up well with the filter, errors will occur. 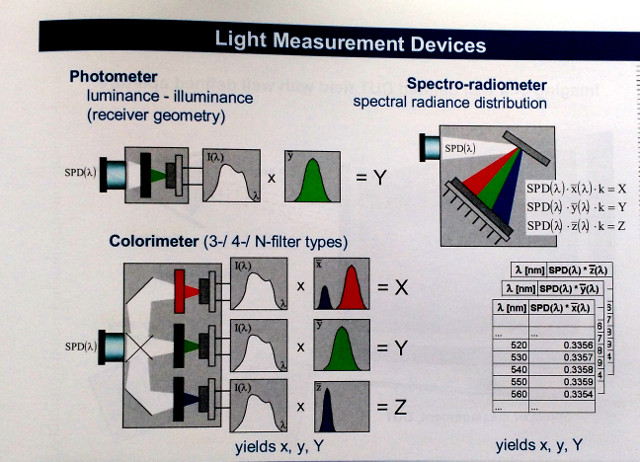 Lange also said that colorimeters have limitations in measuring luminance and chromaticity for dark signal levels, which is an especially important consideration for HDR displays.

Martin Wolf from Instrument Systems, which is part of Konica Minolta, talked about imaging light measuring devices – i.e. ones that use CMOS sensors to acquire a full image of the device under test. These are particularly useful for fast capture of luminance and color distributions over the display. He then described several device architectures along with their trade-offs. Some of these architectures include fiber outputs to spectrometers for accurate spot spectral measurements, for example. 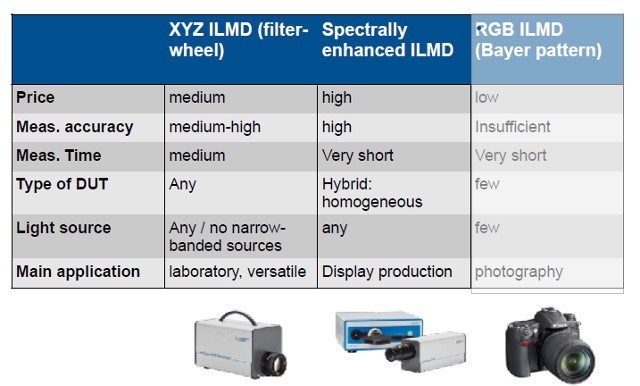 Alan Tirpak of Gooch and Housego talked about their imaging photometers to obtain luminance and color data at each pixel, along with the linear or 2D array-based spectroradiometers and imaging colorimeters.

After lunch, Tom Lianza of Photo Research described the efforts he is heading up as the chair of the ICDM work group looking into metrology for VR/AR and HUDs. He said HUDs are easier to measure than VR devices and that AR devices present the most metrology issues. With VR for example, you need to have an instrument that has an aperture that is similar to the eye’s (3-5 mm) and place this in the sweet spot of the optics. No measurement devices are designed to do this, which is why his company initiated a new telecentric optical design to capture data in the VR headset.

He also described a new instrument from his competitor, Gamma Scientific, that is designed specifically for this type of VR headset testing and mounts the sensor on a programmable stage to automate data capture.

Michael Smith gave an overview of HDR that was quite good, starting from the fundamentals of SDR and explaining carefully how HDR will improve performance. He used the same plot of scene luminance vs. display luminance to show the various EOTF curves and how different approaches affect these transfer curves. Also covered was an overview of HDR video creation and distribution options. He didn’t get into any HDR metrology issues other than to note that ICDM is actively working on these methods.

Prof. Karlheinz Blankenbach from the Display Lab at Pforzheim University and the German Flat Panel Forum focused his talk on the automotive market. He described many of the same needs and requirements that Becker had covered in the morning, but he appears to be working more closely with the primary car makers and their tier 1 and 2 suppliers to develop specifications and standards for automotive displays.  He described OEM specs for automotive display suppliers with luminance, contrast and gamma requirements over various temperature ranges and viewing angles, for example. There are also different requirements for temperature and lifetime of automotive display panels as well as specifications for ambient light performance. His group is helping to bridge the gap between display providers, metrologists and automotive users.

Finally, in an evening bonus session, Ed Kelley returned to give a comprehensive overview of reflectivity measurements. He described dozens of configurations and provided practical advice on the set ups and mistakes to avoid to get consistent and repeatable results.

Obviously there was a lot more detail than can be summarized in this short article, but the take away was significant. Display metrology can be tricky and there are many areas that need development. But the industry is recognizing this as evidenced by the turn out. I am sure this will not be the last of these metrology workshops.