Do We Need Better Names for Various Quantum Dot Devices?

I recently wrote a white paper on the various types of quantum dot platforms being used for or considered for display devices (Quantum Dots will Power Display Products to the Next Level).  With all the varieties of potential solutions, that got me thinking.  How are professionals and consumers going to understand all these varieties?  As a result, I would like to put forth some names for these categories of device.

Most of these types of devices will use photoluminescent quantum dot materials, which means they use light at one wavelength to stimulate light at another wavelength.  For displays, this has so far meant emission of blue light to stimulate red and green quantum dots.

But development teams are also working on a class of quantum dot materials that will emit light based on electroluminescence, that is, by electrical instead of optical stimulation.  A voltage or current would stimulate light from either a transistor or diode driving device (or combination of these).  A matrix of such devices can form a display that is self emissive.

The term “QLED” has been used to describe quantum dot materials on top of inorganic LEDs (photoluminescence mode); to describe an electro-QD (electroluminescent mode); or to describe a LED-based LCD TV with quantum dot technology.  This is creating confusion among professionals which may soon spill over into the consumer market.

The “family tree” below is my attempt to offer a starting point for the development of a common nomenclature or lexicon for discussing various quantum dot display architectures.  Note that I have selected the term “QLED” as the generic name of the family, with hyphenated extensions to represent the various architectural implementations.

Why choose QLED?  For one, this seems to be a next generation term that is not fully defined yet, so ripe for a more positive definition.  Secondly, I am thinking this is a more consumer friendly term.  LCD TVs with LED backlights are now commonly referred to as “LED TVs”.  While I did not like this term when introduced by Samsung some years ago, the name has stuck and now resonates with consumers.  The term QLED becomes an extension of this to represent the next evolution in the technology.  If the term QLED was already firmly established referring to a specific device architecture, I might not find this a great term to use for the family.  But it is not established, so maybe this is the right term to describe the family of products.

I am putting forth this family tree to spur industry discussion, so please add you comments to this article or reply to me privately with your thoughts. 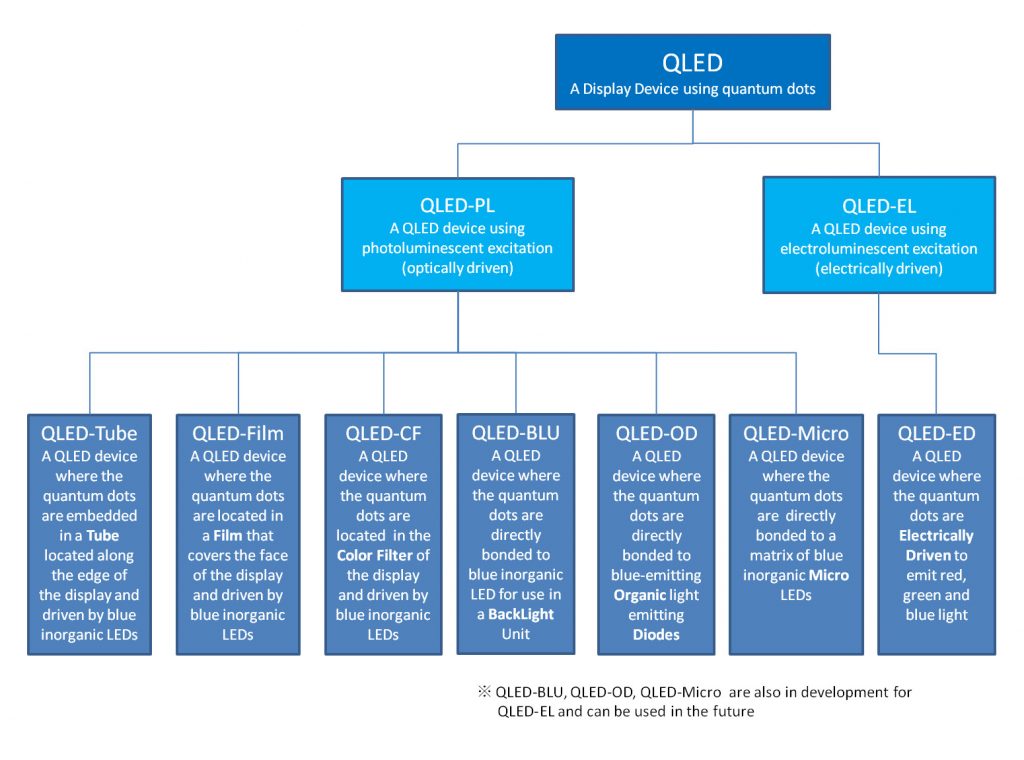