One of the display technologies that is being used in Virtual Reality (VR) headsets is OLED-on-Silicon.  Recently, a new partnership was formed between US-based Kopin and two Chinese partners: BOE and Olightek.  The three have agreed to form a Joint Venture (JV) to build new state-of-the-art OLED-on-Silicon manufacturing facility in China to serve anticipated needs for displays in VR and AR headsets.

So why have these three joined forces?  Kopin’s expertise lies in microdisplay design and manufacture (LCD, LCoS and now OLED) having produced over 30M devices so far.  The company is strong in backplane design and has manufacturing experience with LCD and LCoS microdisplays.  They have also been very active in development of all the elements of VR headset design (optics, electronics and ergonomics).

BOE is already the largest LCD maker in China and is the clear leader in direct view OLED display production in China as well for use in devices such as TVs and mobile phones.    According to David Hsieh at IHS, “BOE’s [direct view OLED] capacity will grow by 10 million m² per year from 2017 to 2019 as it ramps up the B10 Fuqing Gen 8 and B9 Hefei Gen 10.5 fabs. Meanwhile, ramping up Gen 10.5 in late 2018 will allow BOE to take the capacity crown away from LG Display in 2019 to reach 54.8 million m² in 2019.” And it is expanding its OLED ecosystem activities in many areas.  This includes OLED printing (Kateeva), sub-pixel rendering (Yungyinggu) and VR/AR headsets (Xloong).

The entry of BOE into this niche part of the display industry is interesting. The combination of Kopin, Olightek and BOE is a strategic blend of Kopin’s microdisplay expertise, Olightek’s micro OLED manufacturing capabilities and BOE’s world class large scale manufacturing and is designed to dominate the OLED microdisplay market.

All outsource the fabrication of the OLED backplane to silicon foundries, but then employ different business models for the fabrication of the OLED frontplane and device packaging.  All, except Kopin, are vertically integrated, meaning they do the OLED depositions and packaging in-house.  Only Kopin is pursuing a totally fabless manufacturing model with Olightek  and later BOE, providing the OLED deposition, color filters and packaging for the company.

Kopin claims such a model offers more flexibility and will lead to lower cost microdisplays and AR/VR products.  Kopin says that while the capital investment in OLED microdisplay frontplane equipment is not huge compared to direct view OLED fabs, the utilization of the factory contributes to a large fraction of the cost of displays.   The fabless model allows Kopin to leverage the OLED expertise of Olightek and BOE and their state-of-the-art equipment without the capex and opex burden.

So how will Kopin differentiate their microdisplays?  Hong Choi, Kopin’s CTO said that their patents cover technologies that reduce power consumption, increase frame rate even for very high resolution (120 Hz frame rate for its 2k x 2k display), and improve image uniformity by mitigating any Si process-related non-uniformity.  In addition, Kopin’s patented architecture can reduce motion artifacts by implementing a “rolling shutter” in which each line is reset to black a certain time after it is illuminated. 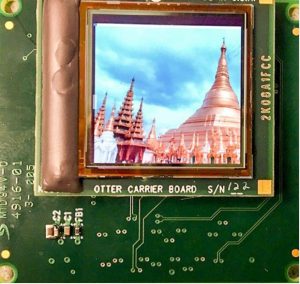 Choi made it clear that Kopin OLED-on-Silicon microdisplays will be very attractive based on the backplane design and features.  He noted that their team has a long history of OLED backplane design expertise in addition to transmissive LCoS and reflective LCoS (via their acquisition of Forth Dimension Displays).  But each technology needs a different backplane design with only limited commonality such as using ramp DAC (digital to analog converter).

Clearly, Kopin, Olightek and BOE see a growing market for OLED-on-Silicon microdisplays and investing to satisfy this expected demand.  We will have to see if this bet pans out.