Most industry attention today is on 4K and UHD/WCG, but the 8K ecosystem has been progressing over the year driven largely by NHK in Japan. The plan is to broadcast the 2020 Summer Olympics in 8K/HDR/WCG to special venues and even homes with 8K TVs.

While we can certainly debate the value of more pixels in content capture and display, the big consequence is the need for bandwidth and moving all those pixels around. In this column, I want to talk about 8K connectivity in a production studio, professional or home environment.

So what is the raw data rate of what is anticipated to be the most popular format; an RGB signal with 4:2:0 color sampling, 8K pixels, 10-bits per color and 60 fps?  29.86 Gbps. For distribution, that will have to be compressed – and heavily compressed.

But what about connectivity of uncompressed 8K signals?  Are there single-cable options?  It turns out, there are.

At CES 2017, the HDMI Forum announced the upcoming release of Version 2.1, which will offer support for higher data rates, dynamic metadata and improved audio signaling. In terms of bandwidth, the data rate will rise from 18 Gbps to 48 Gbps using four lanes running at 12 Gbps with 16/18 bit encoding that reduces the usable payload to 38.4 Gbps. That’s a huge increase and is enough to support the signal above. Silicon to support this protocol is not yet available, but should be widely adopted by 2020. 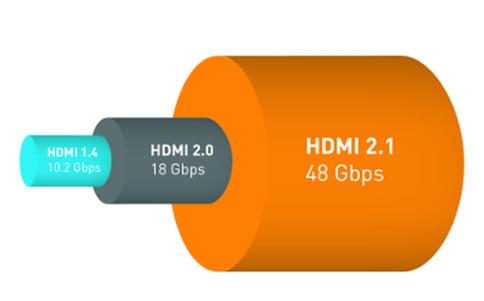 The connector will remain the same for backward compatibility.

DisplayPort version 1.4 was published in March 1, 2016, but no new transmission modes were defined. Instead, DP 1.4 adds support for Display Stream Compression 1.2 (DSC), Forward Error Correction, the high dynamic range (HDR) extension defined in CTA-861.3 (static metadata),  and the Rec. 2020 color space. Using DSC with HBR3 transmission rates, DisplayPort 1.4 can support 8K at 60 fps up to 16-bit 4:2:2. It can even support 8K at 120 fps 12-bit and 4:2:0 – plus HDR and WCG. Support for dynamic metadata is unknown at this time, but is likely being discussed and should certainly be implemented by 2020.

At CES 2015, the MHL Consortium announced SuperMHL which was designed to enable 8K video over a single cable. The protocol uses six data lanes (twisted pairs) each running at 6 Gbps to obtain a raw data rate of 36 Gbps. To enable higher fidelity 8K image flow, they also implemented Display Stream Compression (DSC) for an increase in data rates of up to 3x. However, with data error correction, we estimate the usable maximum data rate to be 20% lower or 86.4 Gbps. Lattice semiconductor has released chip sets that support this connectivity protocol.

Thunderbolt 3 doubles the combined data rate of the previous version to 40 Gbps and halves the power consumption. Up to 100W of power can also be delivered using the USB Type-C connector.

Since this is used primarily on Apple devices and Apple does not yet support 8K, there is no explicit 8K support mentioned. It is likely that a higher bandwidth version, perhaps at 80 Gbps, will be developed by 2020.

USB is probably the most ubiquitous wired connector worldwide and the addition of the new Type-C version to the USB 3.1 specification is opening it up to incredible new capabilities, especially in the Alt Mode. This mode allows 10 of the conductors to be used in novel or standard ways. Standard signaling protocols that can be supported in this mode include:

The standard also supports compression of the video (DSC). This can be used to lower the data rate for video, thereby saving power and extending battery life on the mobile device.

While not all the 8K connectivity has been implemented yet, give it a year or two.

If that is not enough options and bandwidth, there is also a new interface being standardized by SMPTE called U-SDI. It is a 24-core multimode fiber that runs at a raw data rate of 240 Gbps (lower with error correction), and supports a maximum cable length of 100m. 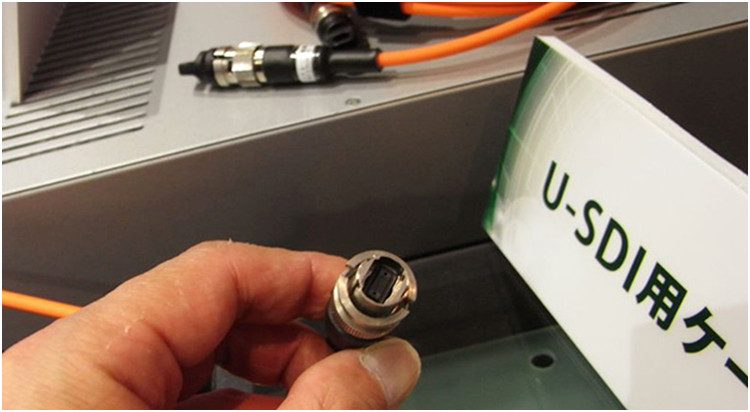 New gear from Astrodesign already incorporates this connector, which is aimed at professional applications.

And for internal product 8K connectivity, Thine Electronics of Japan has announced the latest V-by-One US interface. The transmission rate of the US version is four times faster than the HS technology and Thine issued this table of comparison between the firm’s interfaces and the LVDS approach. Thine said that each lane of V-by-One US achieves 16Gbps. 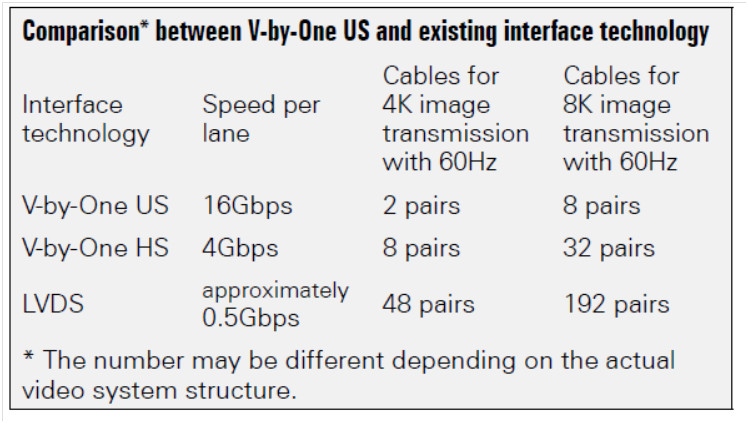 So there you have it – a quick summary of 8K connectivity now and into the near future. It seems that this part won’t be an issue if and when people want to move to 8K.