Two years ago we told you about TriLite’s first demonstration of an RGB laser scanning system that it was targeting for large-area 3D without glasses in digital signage applications. (Giant 3D Displays from TriLite). At Photonics West 2017, the company showed a sample of the projector.

In addition, they debuted a pico projection engine that they hope to work on with a partner, to service the AR and HUD markets.

To review, TriLite has developed a tiny RGB laser source that they couple to a MEMS-based scanning mirror. These RGB laser beams arrive at the mirror as separate beams, but are combined using what CEO Ferdinand Saint Julien described in our phone call as “software beam combination.” He said this is different from what companies, which is to combine the RGB laser light before it hits the mirror using micro optics. “Software beam combination reduces, size, weight and cost compared to the micro optics combination method,” stated Saint Julien. 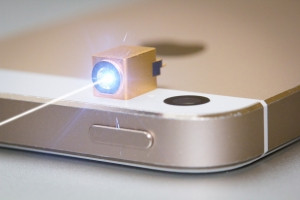 his RGB laser and scanning mirror combination is what Saint Julien calls a Trixel. It is a single pixel with an array needed to create a display. The pixel pitch is 18mm, so the device needs to be targeted at signage applications that are viewed from some distance away (at least 30 feet [9m]).

But the Trixel has some special and very unique properties. With its single axis scanning mirror, TriLite is able to send light into 1,000 controllable directions over a 40º field of view. This enables images to be presented in two modes.

The first mode is autostereoscopic 3D, meaning a large number of views can be presented over this FOV for glasses-free imaging. I have not seen a demo to evaluate the image quality, but with all these controllable view directions, it should be possible to create a very smooth 3D image with no transition zones as it is a scanned system and not one based on zones. 3D images are viewable up to 60 metres away.

The second mode is multi-content. Here, the idea is to present two to five different full screen images over the FOV, with each image appearing in different parts of the FOV. “That enables the owner of this digital sign to sell Nike an ad that displays when customers exit their store and a Hamburger ad for customers exiting McDonalds – all from the same sign, assuming these stores can both see the sign,” explained Saint Julien.

Over the last two years, TriLite has been working hard to get the suppliers of the green and blue lasers to deliver them as die instead of packaged lasers. This was essential for TriLite to be able to reduce the size of its solution, which must be vertically integrated to allow large matrices for digital signage applications.

“There are four main suppliers of GaN-based blue and green lasers,” explained Saint Julien. “Two years ago, none of these would consider providing their lasers as die, but we have seen the industry attitude toward supplying laser die change recently. As a result, we now have the possibility of sourcin our green and blue laser dies one of these suppliers. What convinced them to source for us?  They saw the large volume potential for our solution,” continued Saint Julien.

A Differentiated Option
As for the new mass production agreement, St. Julien could not reveal the name of the company, but he did say they are an established player in the digital signage market. “They have a sales distribution channel and have experience in creating 2D and even 3D content as well,” said Saint Julien. “Competition in this industry is primarily on pixel pitch and price. Our laser solution offers them a new and differentiated option to take to their customers.”

It seems that many of the details of this agreement have yet to be worked out such as the location of manufacturing (it won’t be Mexico, I joked), whether some parts will be contracted out, the product plan and more. But, the partner has apparently committed to spending a considerable sum to buy equipment to perform active alignment of the chips and optics and produce the Trixel arrays in a consistent production method. Volumes won’t be huge, but this is a big step forward from the lab-scale products make by TriLite so far.

Initial pricing won’t be cheap, either. Saint Julien expects signage to be quoted by the sq. meter and priced somewhere around five times the cost of an equivalent pitch LED display.

TriLite is now looking to partner with companies to further develop the solution for AR/MR or HUD applications. Engineering samples are available and the projection engine can be used to inject an image into waveguide-based solutions or other optical designs to create an AR or HUD image.

We also asked about speckle reduction. Apparently, TriLite’s CTO has experience on speckle reduction, so they are quite familiar with various methods to accomplish this. In AR architectures where you direct the light directly to the retina, speckle should not be an issue, but other designs with an image plane will need some speckle reduction.

Overall, the company has made excellent progress in the last two years and seems poised for more interest in their technology.