TI to Bring 4K DLP to the Masses

Texas Instruments has had a 4K 3-chip DLP solution for some time, but it’s a big, 1.4” device that allows high brightness 4K projection at a hefty price. Meanwhile, Sony has made great headway offering a line of 4K projectors at more reasonable price points for the home and commercial markets. At CEDIA 2015, TI finally revealed its answer to a more affordable 4K solution.

Insight Media and other special guests were invited to a demo presented by TI in a meeting room in the nearby Omni hotel. TI’s Roger Carver showed us the current DLP 4K chip and then he showed the new one (photo). It is a 0.7” diagonal chip with 4 million mirrors fabricated using the TRP (Tip & Roll Pixel) design found in the company’s pico projector chip sets. But the new chip is not aimed at pico applications, but rather mainstream home cinema and commercial single-chip DLP application up to about 5,000 lumens in brightness. In other words, the heart of the projector market. 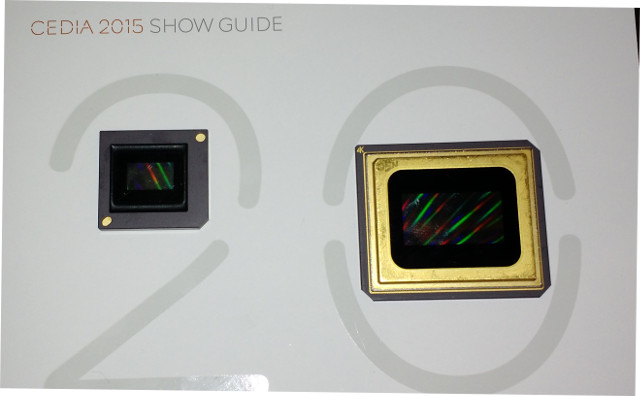 Carver told us to expect some private and maybe semi-public projector demos with the new chip set by CES 2016 and show floor demos by the ISE time frame. The chip set will be fully qualified by April 2016, so projector products could roll by the summer of 2016 – and priced competitively.

You may have noticed that the DLP chip has 4 million mirrors and a UHD image has 8 million pixels. The solution is an image shifting technology that is similar to what Epson and JVC use, but whose performance is dramatically better. The engine architecture remains essentially the same using a single chip and a prism to couple light onto the DLP imager. But TI inserts a small glass element between the prism and projection lens. This is driven by a voice coil, so supports slow frequency modulation. The voice coil moves the glass just a little, but it is enough to shift the projected image on the screen by a ½ pixel up and a ½ pixel to the right. 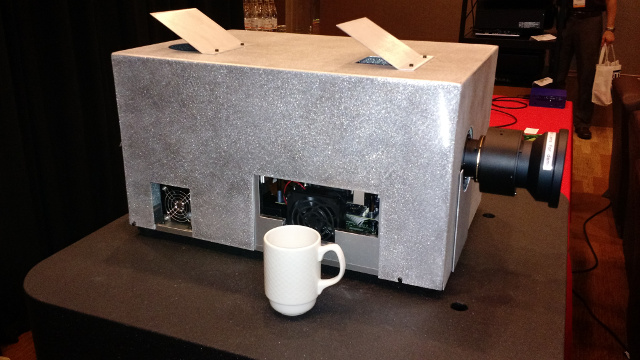 To prove that the prototype projector was creating a real UHD resolution image, the company showed a number of images in side-by-side comparisons with the Epson and JVC e-shift models and with a Sony native 4K panel projector. The results were more impressive than I had imagined with the TI projector slightly beating even the Sony native 4K projector.

Initially, images of power lines and wires, spreadsheets, maps and a spiral test pattern were shown that compared the JVC and Epson e-shift projectors to the new TI prototype projector. The power lines were clear and separate on the TI device but started to show some aliasing on the other two as the lines converged. Some lines showed a green echo and a series of black and white bars at the edge of the map showed color characteristics that the TI projector did not.

But the spiral test pattern was the most revealing. The image below is from the TI projector and shows white lines on a black background with no serious jaggies or discontinuities in the lines even as they change in angle and periodicity. The JVC and Epson projectors did not fare as well. On the JVC projector, some of the lines were actually dotted and had some color variations. The Epson projector showed a series of purple lines with some hourglassing of the lines. TI thinks these color issues may be due to alignment of the three panels and possible beirefringence issues with the liquid-crystal-based shifting element. 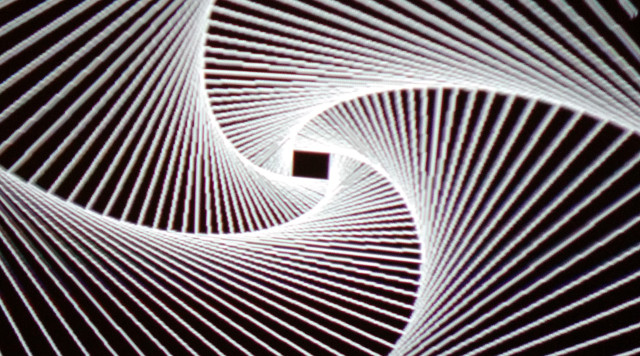 These artifacts were clearly evident on the spreadsheet image where the JVC and Epson projectors looked soft compared to the TI unit and had loss of parts of certain letters and characters (JVC). On the TI projector a single pixel wide white line was sandwhiched between two single-pixel-wide black lines (photo below). The ability to display lines of this level at a certain contrast ratio is one valid way to define resolution. If you can do this for 3840 horizontal and 2160 vertical line pairs, that is a UHD resolution display. TI proved their projector meets this definition, but the JVC and Epson e-shift could not show this line separation. 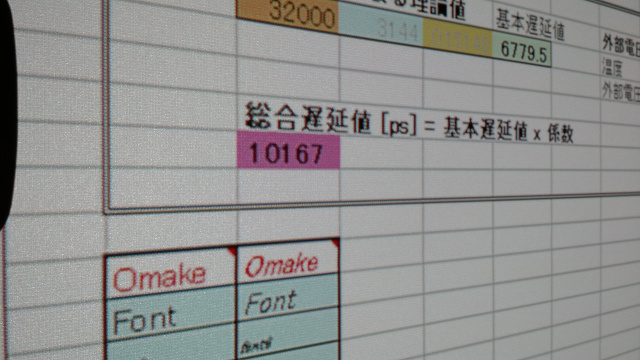 The TI projector was then compared to a Sony native 4K panel projector. Here the comparison was much closer, but I would have to give a slight edge to TI as it was a little crisper overall and had a little bit better contrast. But even if the Sony projector was better, the ability to create such fine 8 million pixel images using 4 million mirrors is a great accomplishment for TI.

What enables TI to deliver such great images using an image shifting technique?  One is the use of a single chip vs. a 3-chip solution that avoids any convergence issues and chromatic artifacts. The second is the very fast modulation capability of the DMD which is an order of magnitude faster than the LCD/LCOS competitors. Third, is the image processing algorithms developed by TI to create 8 million sharp pixels from 4 million mirrors. Naturally, TI is not talking very much about how they do this other than to say it is based on a super-imaging approach.