IRYStec to Optimize Your Display to the Ambient Conditions

A display’s performance is measured in a dark or dim room, but the display’s performance does not often account for the fact that it will be viewed in dark room, normal ambient illumination and in bright light.  For example, as ambient illumination goes up, the perceivable black level rises, darker tones are harder to see, colors become desaturated and overall contrast decreases.  IRYStec Software has come up with a solution to address these and other ambient-related shortcomings in a software platform they call Perceptual Display Platform (PDP).

To learn more about the company, its technology and plans, we spoke with company CEO Simon Morris.  He explained that the company was formed in Feb. 2015 by Tara Akhavan CTO and Afsoon Soudi VP R&D and was based in the TandemLaunch incubator park in Montreal until April 2016.  The Company closed its first Series-A round of funding in July 2016.

Morris explained that displays have historically been designed and built by image processing and hardware engineers.  But human vision is very complex and part of the display-viewing experience.  As a result, they are using physiologists with a deep understanding of human vision perception to augment the way they process the display stream for various purposes.  In particular, he confirmed that their algorithms take advantage of well-known perceptual effects like the Hunt Effect, the Steven Effect and the Purkinje Effect.

The perceptual library modules inside IRYStec’s first product, MOBILEvue, takes into account the viewer’s sensitivity to color and contrast changes in different ambient environments and compensates for the color and contrast loss on a dimmed display in a dark environment.  It can also increase the perceived contrast in a sunny environment. The MOBILEvue library uses the ambient brightness information provided by most device ambient sensors and associated auto-brightness applications.  And, all this can be done in real time.

Morris then laid out Irystec’s roadmap for development of software-based display solution for the next couple of years.  First up is a product they call MOBILEvue and it is a set of image processing functions with global and local operators being applied to the pixel data of the image frames.  This is currently available as library written in OpenGL that is designed to run on a GPU.  For devices that use an applications processor without a GPU core the MOBILEvue library could be ported to execute as a OpenCL or C++ library used in the display rendering processing pipeline.

These algorithms are designed to:

Tests show that in bright light MOBILEvue will save ~30% of device power for LCD-based smart phones.  This can vary depending on the display resolution, size and maximum brightness.  For instance, power savings on a tablet could be better than 30%.

In a dark, one can reduce display luminance from 20 nits to 5 nits while maintaining the same visibility and reduce power consumption by 5 to 10%.  This device level power saving percentage rises to more than 30% when the display is running at higher luminance levels in brighter ambient  (~350 nits).

Morris says users can effectively trade off improved visibility with power savings as they see fit.  They expect automotive applications to likely focus on improved visibility, but may also opt to decrease display brightness in the sun in order to reduce display power/heat issues.

Exactly how the Perceptual Display Platform works remains proprietary, but  the images below show the effect in bright (top) and dark (bottom) ambient conditions. 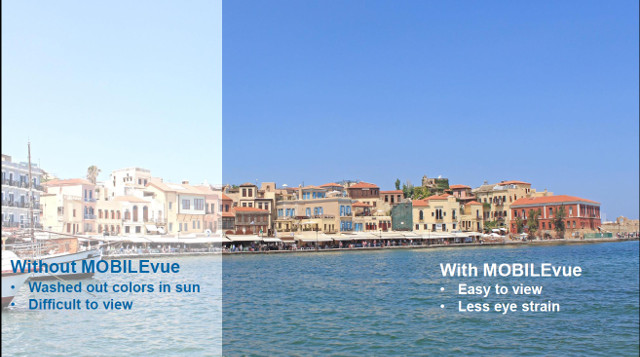 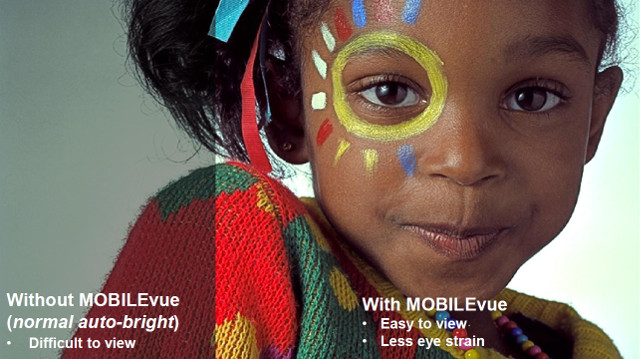 IRYStec backs up these claims by citing several studies they did using a small group of 20 to 50 observers in bright and dark conditions showing content with and without the IRYStec technology on a Samsung Galaxy S OLED tablet.  They have also conducted OS level testing on Android smart phones confirming the power savings and visual experience benefits.

Starting in 2017, the company expects to address the VR market.  Here, the benefit is anticipated to be reduced power and heat for similar picture quality.  This likely will be followed by the first “personalization” technology demonstrations.  In this case, the age of the user’s eyes is assessed and this information used to modify the algorithms based on the user’s physiology.

For example, as we age, we experience cornea yellowing and many other physiological changes that alter our “White” perception.  This can be compensated for. The Perceptual Display Platform technology is also being productized for the automotive market.  Here, optimization of the readability of the display in very bright environments offers a clear value proposition, but they also believe that they can improve readability of information at night as well.  Morris says the customer focus will likely be on the center console display.  This PDP based product will be called DRIVEvue.

The company is also working on other personalization technologies like measuring and then compensating for the user’s color blindness.  The company’s researchers are even looking at gamut expansion algorithms the map BT.709-based content to the larger color volumes of some displays.

IRYStec is not the only company looking at making adjustments to the image to compensate for the ambient and the user, but they seem to have a smart bunch of researchers and advisors.  We will have to keep an eye on them.