HDR games are mostly played from game consoles onto HDR TVs. For example, the Microsoft Xbox S and Xbox X models, as well as the Sony PlayStation 4 Pro, all support 4K resolutions and a HDR10 output. Many titles that are available for console gaming are also available for PC gaming on Apple, Windows or Linux platforms. However, there are far fewer HDR and/or 4K titles available for PC platforms than for consoles. That will have to change to expand the market.

In terms of GPU cards, both Nvidia’s Pascal-based cards and AMD’s 390x and Polaris cards support HDR. Base models support 1080p and higher end ones support 4K. However, two new types of HDR have emerged in the PC gaming market: G-Sync HDR from Nvidia and Freesync 2 from AMD. G-Sync HDR means that the monitor will support 1000 cd/m² of peak luminance and run at a 144Hz frame rate. AMD’s FreeSync 2 spec is not as severe allowing panels with 350 to 400 cd/m² to be used. Neither seems to place a spec on the color gamut coverage or resolution, however.

Both G-Sync HDR and FreeSync 2 alter the pipeline for HDR content rendering. They were developed because of poor HDR support in Windows 10, long lag times and the need to do two rendering passes (once in the GPU and once at the monitor to transform to the native color and luminance space of the monitor.) Monitor processors are not as powerful as TV ones, so this can add a lot of lag. G-Sync HDR and FreeSync 2 address these issues.

In terms of HDR monitors, models that support HDR10 and AMD’s FreeSync 2 are now available from Samsung, but the Nvidia G-Sync HDR models are delayed. Last week, LG Electronics announced a new 34” G-Sync model that will be unveiled at CES 2018. It seems that the G-Sync panels are coming from AUO and reportedly will now finally be available for Q1’18 monitor shipments.

The table below summarizes some of the announced and available models for HDR gaming. Note that there is a wide range of resolutions, luminance levels and color gamut performance even if they can decode an HDR10 signal. 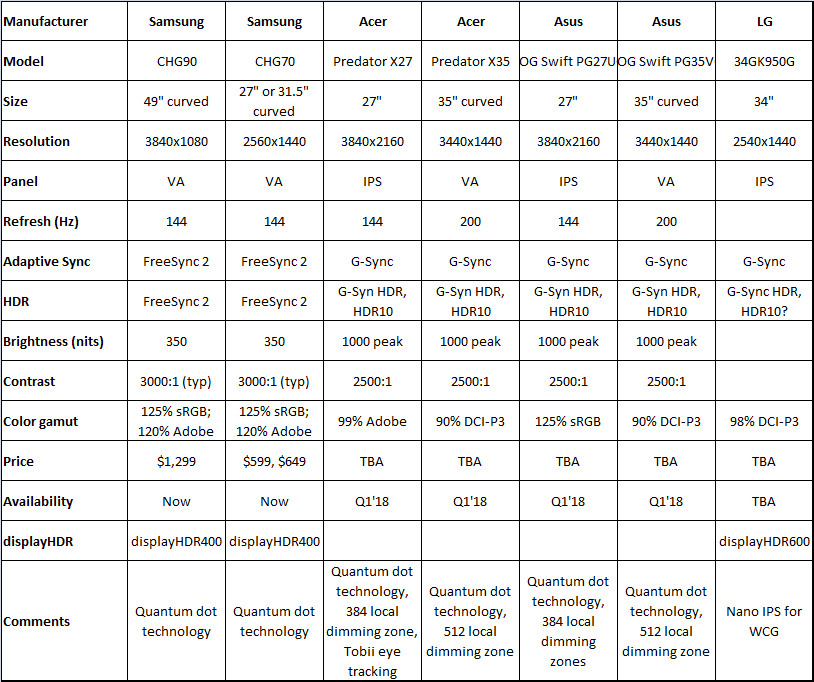 Also note that three of these models are now using the displayHDR logo to indicate their meeting a series of performance metrics via a new standard developed by VESA. There are three categories: displayHDR400, displayHDR600 and DisplayHDR1000. The tests and performance levels for each category are detailed below. 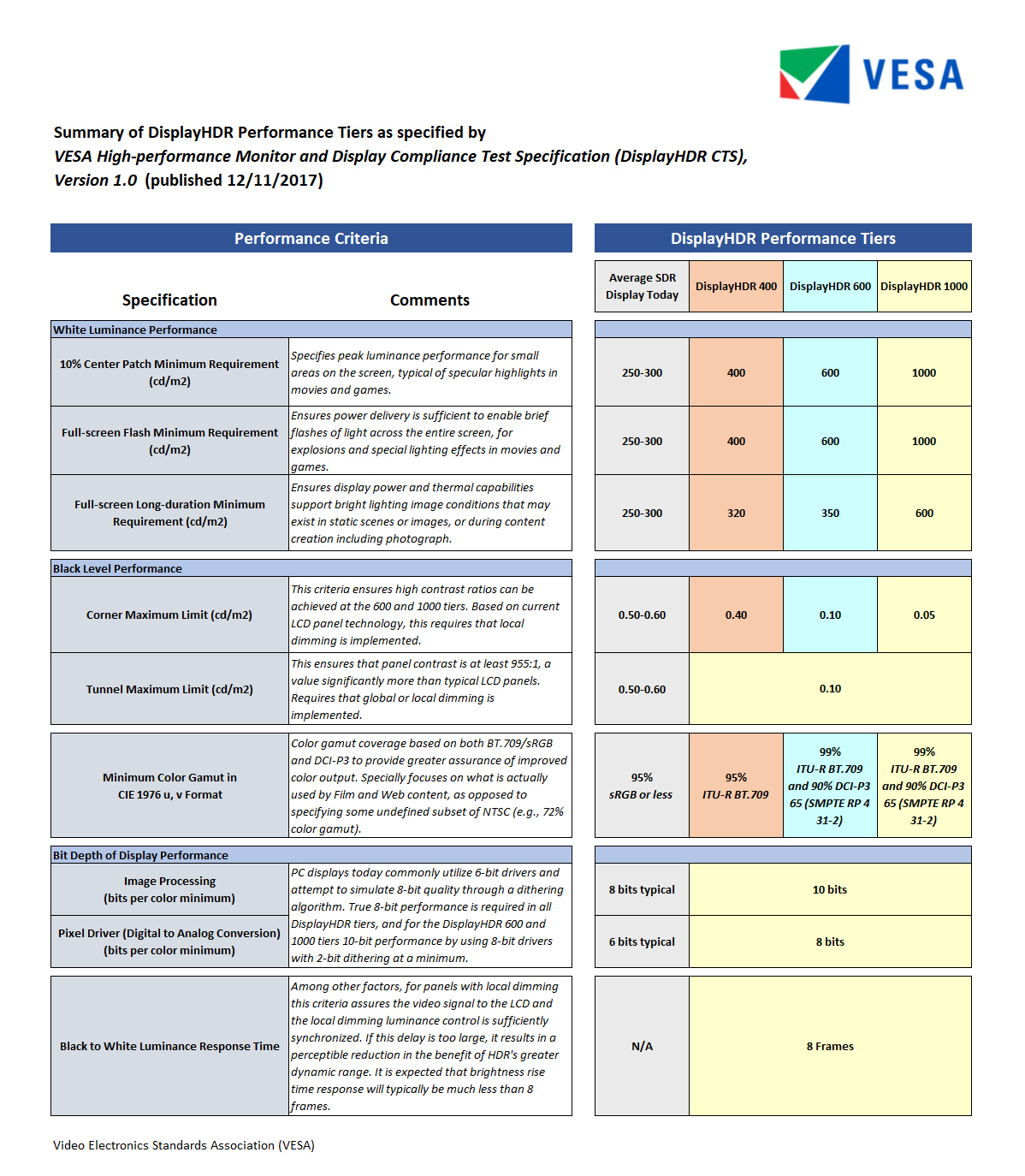 O/S support for HDR is uneven. For example, Windows 10 now supports HDR10, but support is far from perfect. In most cases, gamers will need to switch the OS into HDR10 mode for gaming and switch it off for everything else. Why? According to reports I have read, the HDR mode creates problems with many other programs and apps. Some of these issues have been addressed with new drivers for the Nvidia cards.

What about the other uses of HDR in monitors? For HDR production, Apple has just announced that Final Cut Pro X 10.4 now includes support for HDR (HDR10 only?) as well as 8K support. This is designed to run on the new iMac Pro.

The Android 7.0 Nougat OS supports HDR, but that is installed mainly on mobile and some TV devices. To address the PC market, the Chrome browser is reportedly getting updated to support HDR as well. This should be useful for streaming YouTube or other sources of HDR content.

Netflix has also updated its app to run on Windows 10 platforms in the Edge (but not Chrome or other) browser to allow better HDR performance on movies and episodic content.

LG will also use CES to show off a 32” 4K monitor and a 34” 5K monitor. Both feature an IPS panel with 98% of DCI-P3 color gamut coverage and displayHDR600 certification. Samsung will also show a new monitor (Samsung’s QLED Gaming Monitor Industry’s First to Achieve VESA DisplayHDR Certification) 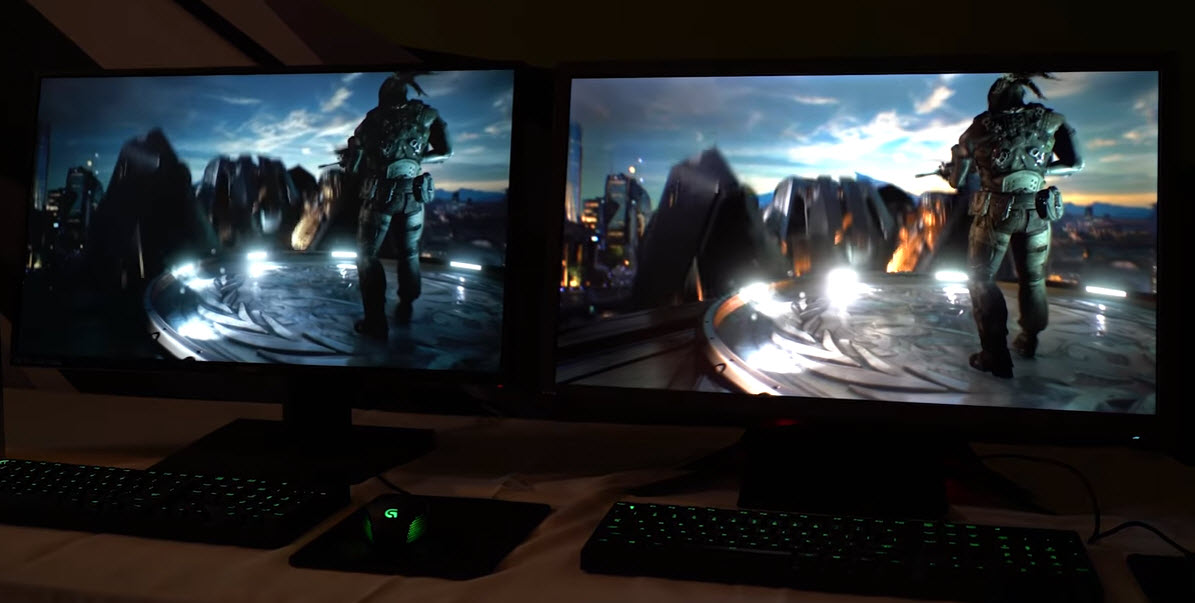 However, it appears that all HDR support in the PC market is for HDR10 – there is no support for dynamic metadata standards like HDR10+ or Dolby Vision. That may be OK as a starting point, but eventually PC monitor and GPU makers will want to move in this direction, I suspect. That will take cooperation with the O/S companies, monitor and panel suppliers, plus AMD and Nvidia.