StreamTV had a very good location right in central hall next to the LG Electronics booth. They were highlighting their latest large format glass-free 3D displays along with some smaller notebook and phone-sized versions.

StreamTV has been developing its technology for eight years and always seems to be getting ready for volume manufacture. We were told the same story again this year. They realize that they can’t reach their goal so have recently done some changes in the company. The Eindhoven team called SeeCubic, was working on their processing ASIC design, but this has now been assigned to a new more specialized team working in Silicon Valley. The SeeCubic team will return to their roots in new technology development, now headed by Bud Robertson. This team has designed some new optics for their panels to improve performance.

In TVs, StreamTV is working with BOE as the panel supplier. BOE has a 16M pixel 8K panel that Stream call “8K Lite.”  What that means is that the panel uses sub-pixel rendering to achieve an 8K image. Some do not believe such rendering should be called 8K, so the “lite” monitor is used. Reportedly, BOE is also working on a more conventional RGB stripe 33M pixel 8K panel as well as a 16K panel. More pixels clearly helps with glasses-free 3D.

However, the sub-pixel rendering does add some new options for creating the multiple stereo views needed for the display, which the new optics seem to capitalize on. The result is that the 8K Lite panel can deliver 1080p resolution images with the extra pixels devoted to providing more depth.

As with all glasses-free 3D displays of this type, the processor must create multiple stereoscopic views that are viewed only from certain angles. In an auto-stereoscopic display, these angular 3D views are all displayed at once so that multiple people can see a 3D image. This angular control is provided by the lens assembly that sits above the panel. But creating all these views with a limited set of pixels reduces the resolution per view. And, the limited number of views need to be packed tightly together to form as smooth an image as possible with small head movements. To fill the full 180-degree FOV of the display, these limited views get repeated. And, the display must be optimized for a specific range of viewing distances.

On display was a 65” version of this implementation. Once you’re in the sweet spot, the 3D can be quite good with small head movements not producing any discomfort. Larger head movements are not as good with a “swimming” kind of feel to the image quality.

As for production, the new design team estimates the new FPGA (not an ASIC until volumes are established) will be ready in Q3 or Q4’19. That means small volumes of the TV could ship by the end of the year. The decision to create an ASIC will be made at the end of 2019 potentially enabling lower cost solutions for 2020.

At a press conference in November, BOE and Stream TV announced their partnership and launched the first product, a 65″ 8K “Lite” television. The new 27″ PC monitor is the second product under the new partnership, with more in development.

This same ASIC, which is used to convert any 2D or stereo-3D video to the glasses-free 3D format, will be used to power monitors, tablets and laptops too, we were told. The 27-inch “8K Lite” PC monitor offers 16 million pixels and was shown along with laptop and tablet prototypes. Stream is reported to be engaged with several customers to bring them to market.

All of these displays can offer decent images if positioned in the right spot and the content is well crafted and controlled (i.e. not too much depth). Nevertheless, they still have the vergence-accommodation mismatch that will create eyestrain and is problematic for a number of people.

StreamTV has also dropped the UltraD brand (too much confusion with the UltraHD Alliance and 4K) and will now focus on the SeeCubic brand name of their technology. 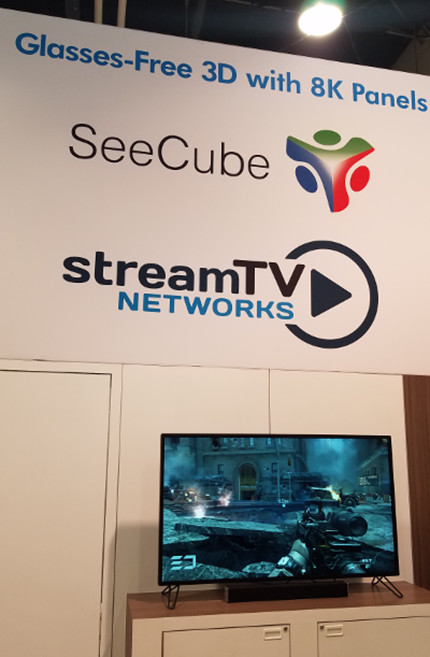 Dimenco was the second company we visited in an off-site suite. Like StreamTV, they have been focused on glasses-free auto-stereoscopic 3D for a long time, but at CES 2019, the focus has clearly shifted away from glasses-free auto-stereo to eye-tracked stereo 3D. One still has to generate the multiple views at different angles, but by eye tracking, the display only has to provide one pair of stereo views at a time, which means there is no trade off in resolution as with auto-stereoscopic configurations like StreamTV. The trade off for Dimenco is that this is now a single user experience. That makes for better images on monitors but is not very appropriate for TV use.

As a result, Dimenco is going down the path to add additional sensory experiences to the stereo-3D image technology they have developed. They call the approach Simulated Reality (SR). At CES 2019, Dimenco announced the global launch of its SR hardware development kit which includes a next-generation user interface and platform for the creation of high-quality interactive experiences without any wearables. It will be available for developers in the second half of 2019.

We had a chance to experience a demo of the elements of this development kit in their suite. It starts with a an 8K 32” glasses-free 3D display that integrates eye tracking, sensors for mid-air hand gesture, spatial sound, a directional microphone with echo cancellation and embedded signal processing. In our demo, 12 speakers also provided an immersive sound field, while 12 cameras (visible and IR) also surrounded the monitor (with embedded PC) with a gesture interface via a Leap Motion controller. All these cameras are needed so that hand gestures don’t block camera views of your hands and eyes. A second PC is needed to run the game content. I must say, this was a better experience that I was expecting and much better than previous demos of the concept I had seen at other trade shows.

Dimenco wants to provide a hardware platform that will start to stimulate creative thinking in how to design the next human-computer interface that can include the kit’s unique multi-sensory elements. Hopefully, it may be adopted across multiple platforms, industries and applications by makers of monitors, laptops, tablets, phones and other devices.

Other demo stations showed how an ultrasonic transducer array, from Ultrahaptics, can provide some physical sensation to mid-air gestures. 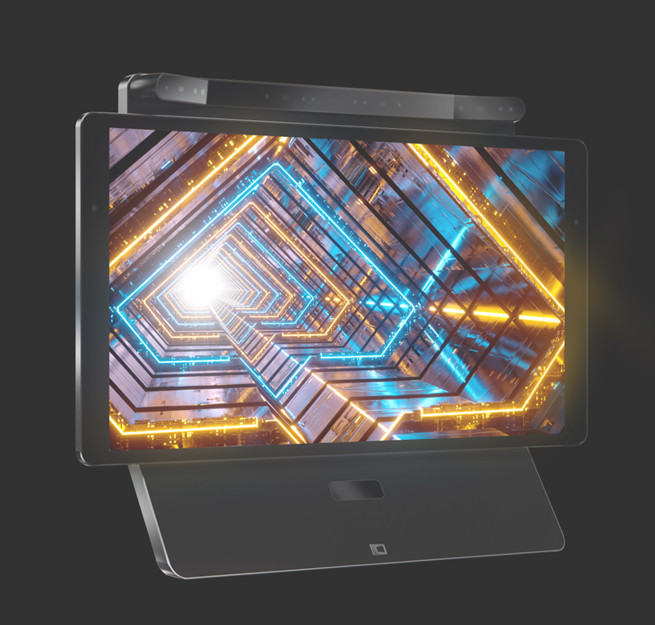 Based in the Netherlands, Dimenco is a subsidiary of Kangdexin Composite Material Group (KDX), China with origins in Royal Philips Electronics. Unfortunately, KDX has just had its assets frozen by the Beijing courts.

Vision Engineering is a UK-based company that has developed a stereo microscope viewer that does not require the user to place their eyes into eye cups. Instead, they have developed a unique optical system that creates a virtual stereoscopic image that can be seen in a defined headbox. Called TriTq3, the device takes the electronic image from a stereo microscope and displays it on two smaller displays, mounted in the top of the device. Projection optics send the light off of two mirrors, the bigger one opposite the viewer in the photo below. 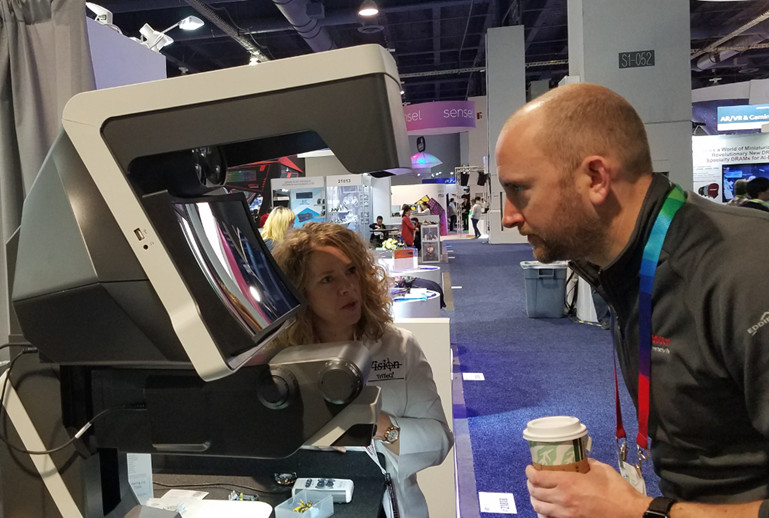 The image is surprisingly good, stable and sharp with a large headbox and a resolution of 4K. What is this good for?  Vision Engineering thinks it will be great for mechanical and electronic inspection and assemble, CAD and building schematic review, 3D concept evaluation, visualization and simulation, medical scan review and remote viewing.

The images at CES were of PCBs from their stereo microscope, but it seems any stereo-3D formatted image can be accepted and displayed. Very cool product.

Creal 3D is a new Swiss company that claims to have developed a light field 3D display. Light field display create solve the accommodation-vergence problem by converging real light rays. Light field images feel natural and have a look around capability with a different view depending on the viewer’s position. Think of it as a holographic image but without the complexity of a real electronic hologram.

On display were two prototypes. The company is focusing on solving the short distance viewing problem with AR/VR systems – i.e. it is very hard to see objects in stereo-3D if they get too close to the user. Light fields can solve this.

Unfortunately, the company was providing no details on how the technology works. Their goal is to take the suitcase-sized demo and shrink it to a smartglasses sized solution by the end of 2019. We will just have to wait and see.