3D display maker Dimenco has announced that Acer will launch new laptops with its Simulated Reality (SR) technology built-in. This is an eye-tracked stereoscopic display which uses an actively-switched lenticular lens technology. While not a new approach, the solution represents a level of maturity not seen before. And perhaps more importantly, a great deal of content is now readily available for easy presentation. With the Metaverse all the craze right now, the timing of the product launch could not be better.

The new laptop is the latest in their Concept D line and called the ConceptD 7 SpatialLabs Edition. Ahead of the launch, I was able to meet with Dimenco CEO Maarten Tobias to get a demo of the new laptop and talk about the company’s plans.

We started out talking about use cases for this 3D display solution. Dimenco and Acer see a clear need for a simulated reality laptop for designers who work with 3D models in many vertical industries as well as the medical field where there is lots of 3D data.

But the application that stood out as particularly compelling was for the viewing of VR content. Think about it. Many companies are creating content for viewing on VR headsets with stereoscopic images. Most high-end smartphones can now capture an RGB image plus depth map that can easily be turned into a stereo pair. All this content can now be viewed on a laptop screen without a headset or glasses yet provides a clear 3D image with full look-around capabilities. The broad availability 3D data sets and easy ability to create 3D content is a major differentiator from previous 3D laptop introductions – and a key reason why this product stands a much better chance of succeeding in the market.

Tobias stated that there are other laptop and monitor makers in the wings that will soon adopt their SR technology, so momentum is building to see more products and potential adoption in the market in the coming year.

Dimenco will allow these brand customers to bring these products to market preferring to stay in the background as the 3D display provider. But they do want to build a brand around their Simulated Reality technology. As a result, the new Acer laptop will feature a “Built on SR” sticker. This allows Acer to then rebrand the laptop solution as “SpatialLabs” – a win for both companies. 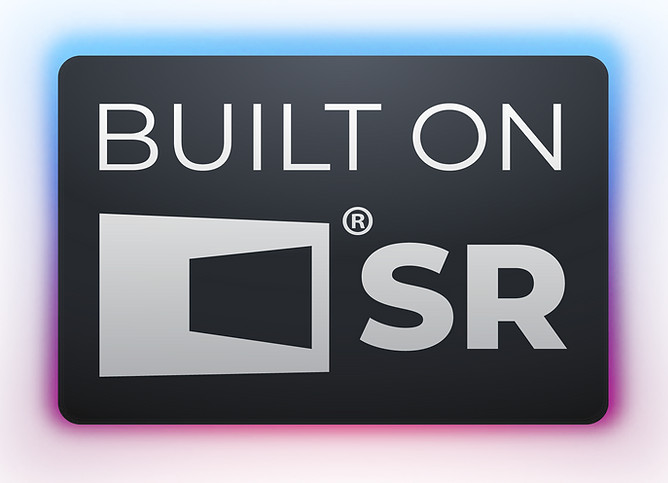 Acer also has a SpatialLabs developer program for Unreal Engine developers, which is a great way to get the new laptop and prepare content for 3D display. Support for popular 3D creation tools like Blender, Maya and Autodesk Fusion 360 are built-in as well.

Landing Acer as a lead customer is a big deal for Dimenco, a spin out from Philips which has been producing 3D display solutions since 2010. The manufacturing of the 3D display panel is done in China by Dimenco’s former parent company KDX, which apparently has met Acer’s mass production quality requirements.

For the demonstration of the new laptop, I was shown a number of applications with a variety of 3D file formats (.obj, .gltf, .glb, .mov, etc.). Stereoscopic 3D movies play well as do CAD files, games and mesh/texture files. The built-in twin monochrome cameras track the head and eye locations to render the two views for playback on the display. I could easily move my head from side to side and not lose the stereo image. This also afforded a “look around” capability to better inspect the 3D image. This means the view is being recalculated based on my head position, not the same view rotated to my new head position. I could tilt my head and the image would adjust to this orientation too.  The viewing box extends from screen bezel to bezel and to about arm’s length – perfectly adequate for users.

Manipulation of the image is straight forward using the mouse pad. The 3D volume is mostly kept within a comfortable viewing volume to minimize any potential vergence-accommodation conflict issues.

Overall, I was impressed with the image quality. The 15.6” display features a native resolution of 4K and the “effective” 3D resolution is close to FHD explained Tobias. “We have also been careful to minimize crosstalk to create a quality 3D image,” he explained.

The only content I found a bit lacking was the gaming demo which had extreme parallax, which I found to be too much but which will be enjoyed by younger viewers, I am sure. There was also a clip of a person in stereo which was supposed to suggest the 3D video conferencing use case. This is potentially a very good use case, but I think it pointed out the need for high quality cameras to assure the quality of the solution.

It should be noted that the 3D effect is realized with a liquid-crystal-based lenticular lens layer that can be turned off to offer a normal 2D screen with 4K resolution. “The Acer laptop will also be Pantone Certified which means our lens layer does not impact color accuracy nor brightness,” said Tobias.

The ConceptD 7 SpatialLabs Edition laptop will be available soon for around $3,500. That is not inexpensive, but it is also a powerful machine suited for demanding professional tasks allowing stereoscopic viewing without glasses.