In the flurry of news from CES, we did not get a chance to delve deeply into an announcement of a new glass called Iris that was revealed by Corning (Corning Stays Ahead in Display Glass). In a conversation with John Bayne, general manager and vice president, Corning High Performance Displays and Advanced Glass Innovations, we had a chance to learn more.

The new glass is intended to enable LCD TVs that can be routinely less than 10 mm thick with some as thin as several mm. That’s thinner than most smartphones, so very thin indeed. At CES 2015, Bayne said that thin LCD TVs from Sony, Sharp, Skyworth (7.5 mm thin) and others were on display, representing an emerging trend in the TV space.

OLED TVs have demonstrated they can be very thin, so LCDs will naturally seek to remove this advantage to maintain their dominance. As a result, Bayne says to expect the first TVs using Iris glass in the backlight to hit the market in the second half of 2015.

Thin LCD TVs have to use edge-mounted LEDs as direct-type BLUs will be too thick. Traditionally, TVs have used PMMA plastic light-guide plates (LGP) because of their low cost and high optical transmissivity. According to Bayne, PMMA has a much higher transmissivity (>90%) compared to most glasses (50-60%), even though both look very optically clear. It turns out that impurities in most glasses (like iron) act to absorb a lot of light leading to the transmission losses. 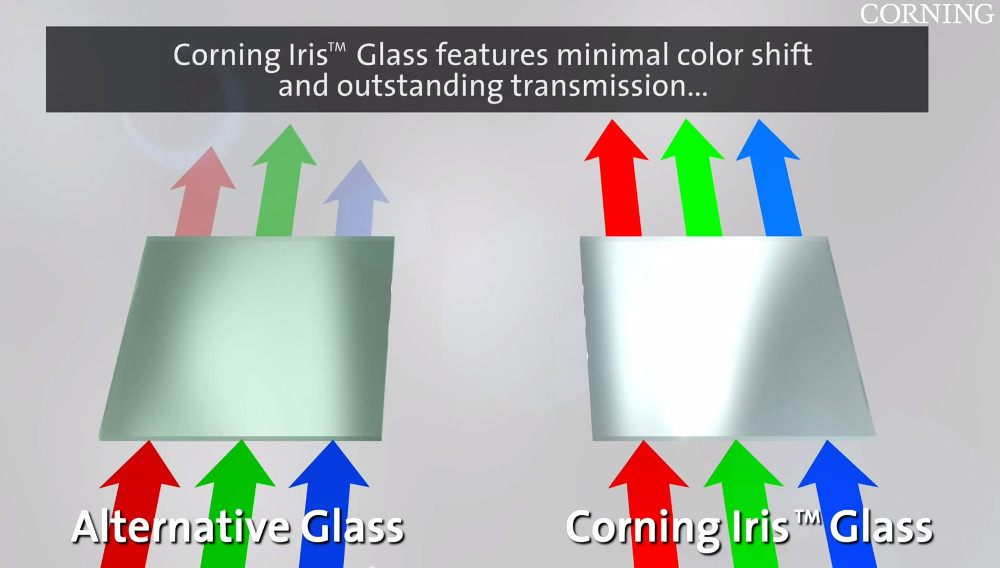 Bayne says that TV makers today use a 3mm thick PMMA LGP but there are a number of additional components and spacers that create a final TV that is more like 35mm thick. Using such a thin PMMA LGP creates more problems than thicker ones. For one, PMMA will expand and contract a lot more than glass with both temperature and humidity. That requires more space around the LGP to account for this, which can also lead to LED light coupling issues. If the LEDs are too far from the LGP there may be poor coupling and a loss of brightness or uniformity. If too close, they can actually damage the LED or heat the plastic too much.

Secondly, thin PMMA sheets start to lose their rigidity which means BLU or TV makers have to add a metal support frame which adds weight, cost and thickness. All this means a thicker stack and wider bezel – something they want to shrink, not expand. 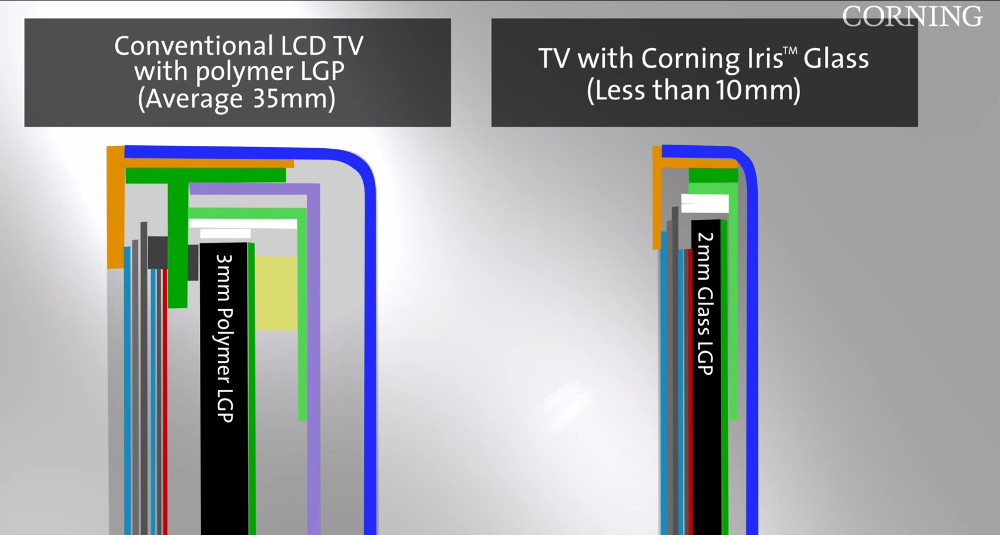 Corning’s Iris glass addresses these deficiencies while obtaining a transmissivity that delivers more RGB LED light to the LCD panel. Iris Glass is 36 times stiffer than plastic and delivers 90% lower thermal expansion. However, Corning says there is no spec sheet yet available for the Iris glass and no number for the transmissivity to compare to PMMA.

Bayne said that the details of Iris glass are proprietary, but it was not so much the removal of impurities as improvements in the composition of the materials used in its fusion process which results in the superior performance.

Iris glass will be more expensive than PMMA LGPs, even including the reduction in additional components. As a result, Bayne expects the first products to adopt the technology to be larger sized 2k and 4k TVs. TVs with Iris glass will carry a $30 to $100 retail premium, Bayne thinks, which may be acceptable on an expensive TV. As volumes increase, it should migrate to mid-tier models as well.

The characteristics of Iris glass seem like they should be desirable in other glass used in the LCD stack, such as Corning’s Eagle XG glass used on the LCD backplane and color filter glasses, or the Gorilla glass used to protect mobile devices. Bayne says these are already mature and well established in the LCD workflow and there would have to be a strong value proposition to make the investment to improve them with some of the Iris characteristics, so don’t expect that anytime soon. However, he would not be surprised to see competitors offer glass products to compete with Iris glass at some point.