One of the more interesting pieces of news coming from CineEurope this week was the European debut of Christie’s CP-4325 digital cinema projector. This is the company’s first standalone RGB laser projector that it plans to offer for mainstream theatrical projection – not just the Premium Large Format (PLF) part of the market where RGB laser projectors have thrived so far.

Clearly, getting the cost of an RGB laser projector is the key to moving the technology beyond the PLF market. So what has Christie done to get there? The big thing is moving from a frequency-doubled green laser solution to new solid state green laser diodes. These have only recently become available from Nichia. Christie is not talking too much about these lasers, but they are likely to be in the 1W range. Wavelength is the other issue. Current frequency-doubled green lasers run at 532nm, which is ideal for covering the BT.2020 or DCI-P3 color gamuts. But it is unlikely that the Nichia laser diodes are running at this wavelength (Christie won’t say exactly what the center wavelength is), but 510 to 515nm is a good guess. That will make it difficult to get the same coverage of BT.2020 as from frequency-doubled devices, but is probably not an issue for DCI-P3. Since that is the standard for cinema today, it is not an issue in reality. 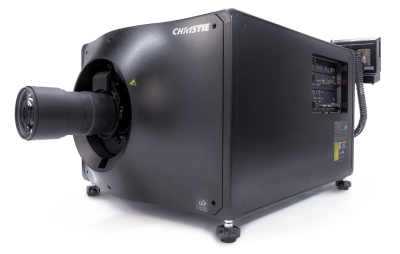 So that’s one big cost saving, with the others being a direct result of this switch. For example, no longer are the lasers located remotely and fiber coupled to the projection head. Eliminating the expensive fiber saves a “bundle.” [like my pun?] Secondly, Christie has eliminated the expensive, noisy and power hungry chillers needed to keep the lasers at temperature. With the CP-4325, liquid cooling is used for the DMDs plus the blue and green lasers, while a thermo-electric cooler is sufficient for the red lasers. This will save power too.

There is also a performance improvement. With an RGB laser source, you are no longer étendue-limited so you can decrease the f-number of the optical system. This allows for an increase in contrast. A typical Xenon-based cinema DLP projector has contrast in the 1800:1 to 2200:1 range. The new CP-4325 platform will have contrast in the 5000:1 to 6000:1 range. And, the higher f-number means light loss is much less – maybe 10% vs. a 30% loss for a Xenon system.

I had a call with Brian Claypool, who recently rejoined Christie to head up their cinema activities, and he told me that the CP4325 is the first of what is likely to be a series of platforms. First up will be a 4K, 25K lumen model, likely to be followed by a 2K version. Other versions with a range of luminance outputs is a likely way to proceed after that, noted Claypool.

The first products won’t ship until Q4’17 so pricing has not been set, so we have to take on faith that there will be only a modest premium compared to a Xenon solution and perhaps equivalent to a laser phosphor solution. Expansion beyond cinema seems likely too at some point, perhaps into the visualization, simulation, museum and theme parks markets where long hours of mission critical operation are required.

But if you move to a 19K lumen offering like one from Barco, the laser cost is 25% higher than a lamp solution over the same 30K hours. That’s why Christie thinks laser phosphor projectors only have an advantage on smaller screens and only for a limited time.

Perkins then showed his forecast for the cinema market. Notice that total unit sales are expected to decline through 2018, but pick up after that as the first digital cinema projector replacement cycles begin. By 2022, only RGB lasers will be sold in the market, thinks Christie. 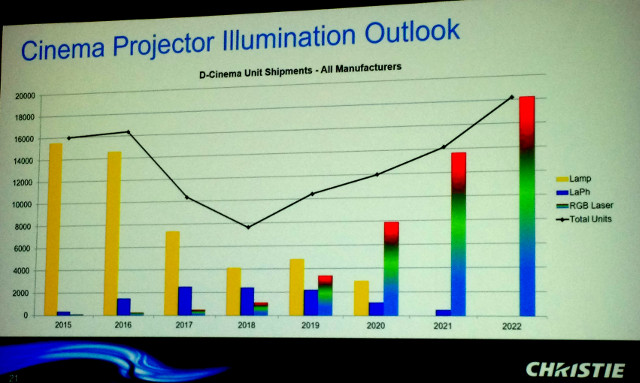 Christie’s cinema projector forecast – don’t be confused by the blue in the Laser projector columns, the laser phosphor units are in a separate column!

The cinema market is far from boring at this time. With the prospects of direct-view LED-based cinema screens, RGB laser projectors going mainstream and HDR standards needing development for cinema, there will undoubtedly be a lot of innovation and potential disruption coming in the next five years.